Texas hits the road in hopes for 3-0 start 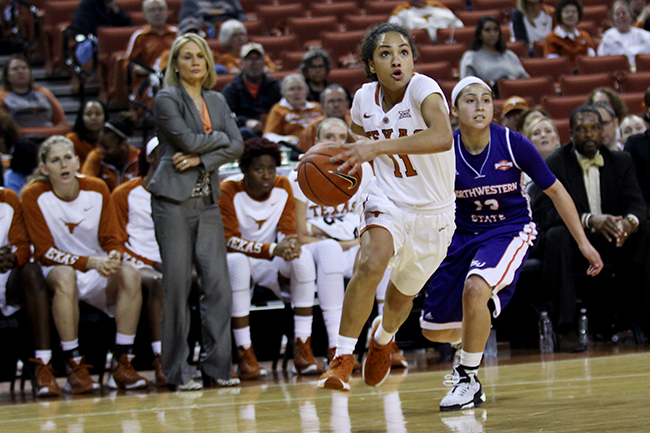 Texas goes on the road for the first time this season to take on Rice in Houston at 2 p.m. Saturday.

Head coach Karen Aston said that although the team has looked good so far, there’s still work to be done.

“We’re obviously working on ourselves in a lot of areas,” Aston said. “I’m pleased with where our team is today.”

Senior center Imani Boyette ended the game against Northwestern State with 25 points — one point shy of tying her career-high at Texas.

Boyette needs eight points Saturday to accumulate 1,000 points career points in a burnt orange uniform. Boyette’s mindset is to not only score, but do so as efficiently as possible.

“I’m just trying to make sure I’m an offensive threat,” Boyette said. “I’ve always been able to score, but I haven’t necessarily made that my primary objective until recently.”

Sophomore guard Brooke McCarty is following Boyette’s lead in the scoring department. She totaled a career-high 22 points against UTSA and 15 more against Northwestern State.

Boyette said her own efficiency in the paint opens up opportunities for the rest of the team.

“If you are going to stay in the paint, [McCarty] or the guards are going to knock down a three,” Boyette said. “We just have a scoring threat from every position. So pick your poison.”

The Longhorns nailed nine three-pointers against UTSA and tacked on seven more against Northwestern State. McCarty has made a team-high seven three-pointers.

Aston said the improvement in Texas’ shot-making ability is a result of the guards’ increasing comfort level in making shots.

“The biggest hurdle coming from last year into this year was shooting the basketball,” Aston said. “I definitely think that we have more firepower.”

Rice (0-2) enters the matchup with Texas on a two-game skid. The Owls play at home for the first time this year after traveling to Kentucky and A&M — Corpus Christi.

Texas out-rebounded its first two opponents by a combined margin of 105-38. The Longhorns look to dominate against a small Rice front — the Owls don’t have a player over 6 feet 2 inches.