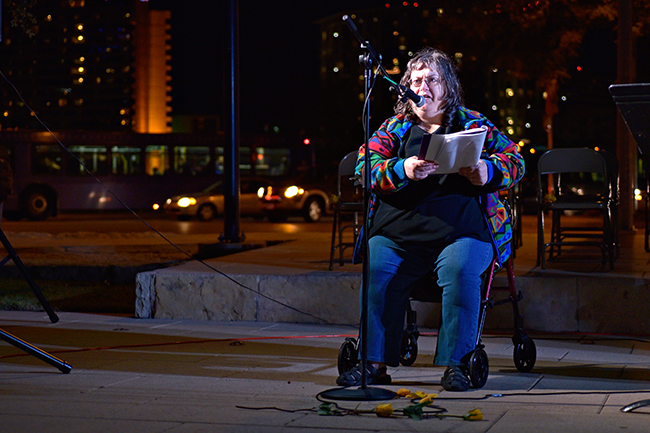 More than a hundred Austinites gathered Saturday on the steps of City Hall to memorialize all the transgender lives lost in the past year.

The number of transgender deaths is at least 21 throughout the United States in the past year, with the number swelling to more than 81 worldwide, according to the Transgender Day of Remembrance website.

“I hope that this day and these spirits live within our souls and that we continue to fight for a world free of violence, free of stigma and free of discrimination against the trans identities,” said Dukes, a Transgender Education Network of Texas board member. “I hope that one day we are able to dance, and we are able to celebrate with these spirits and say, ‘Today, now, we are free.’”

Transgender Education Network of Texas organized the event along with several cosponsors as part of the 16th annual Transgender Day of Remembrance, a worldwide day to commemorate the lives lost because of their gender identity.

Rifka Reichler, planning committee member of Transgender Education Network of Texas, said the event was started in 1999 after the death of Rita Hester, a trans woman of color in Massachusetts, who died the previous year.

“[In 1999,] Gwendolynn Ann Smith in San Francisco started a candlelight vigil … and it’s grown from there,” Reichler said. “We take [the lives lost] into our heart, we say their names out loud and we come together in community to remember.”

According to Reichler, the most marginalized members of the transgender community are generally trans women of color, who are the majority of transgender lives lost throughout the United States this past year.

Stephanie Martinez, chair of the Capital Region Transgender Day of Remembrance, shared a story of a transgender black man who was terrified of transitioning, less because of the process and more because he is statistically more likely to be murdered than his white counterparts.

“I’m lucky because I’m a white transgender woman,” Martinez said. “We have to make a difference. We need to end the very real systemic racism that permeates the society.”

Martinez said organizers are planning on moving the venue next year to a location that more closely reflects the demographics of those marginalized in the community.

Cassandra Fawn, women and gender studies junior, said she thinks it is important to stress the event’s political aspect and focus on the systems marginalizing the transgender community.

“It’s mainly an event of mourning … and an expression of anger regarding the systems which keep trans women in the role of subjugates in society,” Fawn said. “The violence we face is constant every day, and I do not know a single trans woman who has not faced a great extent of trauma.”

According to event organizers, a nationwide Transgender Day of Visibility will be held on March 31, when participants visibly celebrate being transgender to ensure a better world for the community.

“The change begins with us making a promise to make a difference,” Martinez said. “But for the people we honor tonight, that promise has already come too late.”