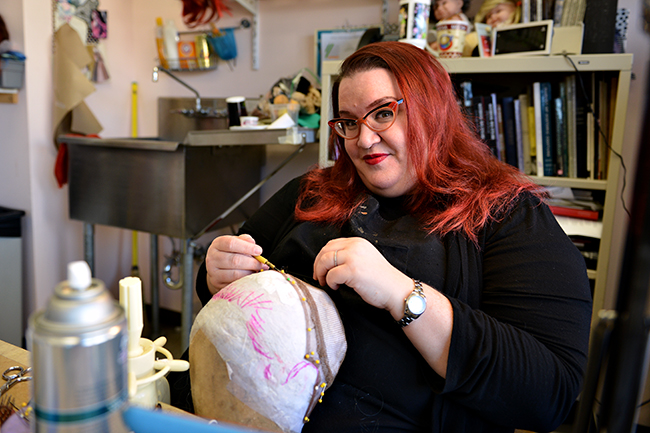 Tucked behind the racks of sequined dresses and boxes of buttons that clutter UT’s costume shop, wig and makeup specialist Allison Lowery weaves hair-like thread into her latest
Shakespearian headpiece.

Lowery, who got her start in high school theatre, learned wig making while attending the College of William and Mary and often ventured into nearby Colonial Williamsburg to marvel at townspeople in period attire and browse the Revolutionary-era wig shop.

After graduation, she worked with a series of theater companies until she came to UT 11 years ago. Lowery has handcrafted hundreds of custom wigs for Texas Performing Arts, sometimes spending upward of 40 hours to create just one. She often prefers to drastically makeover commercial wigs by removing their fake-looking hairlines. After tediously pulling each fine thread through nude-colored lace with a miniature hook, she ties hundreds of individual knots to mimic hair follicles.

Her most time-consuming project, a Martin Luther King Jr. wig, took about 80 hours to finish. She said wigs for male characters are the hardest to create because they leave no room for mistakes.

“With a big, luscious mane, you can kind of hide what’s going on, but everything’s just out in the open with short, men’s things,” Lowery said.

To develop hair and makeup for each production, Lowery said she works closely with costume designers to capture the show’s period and setting.

Lowery occasionally dons a wig of her own outside of work, where she’s an amateur photographer and self-described roller derby “super fan” who goes by the name Lady A.

“I’d always heard about it when I moved to Austin. I was like, ‘This sounds amazing. I have to go,’” Lowery said. “I pretty much fell in love at first sight.”