American Sign Language to be offered as transcriptable minor 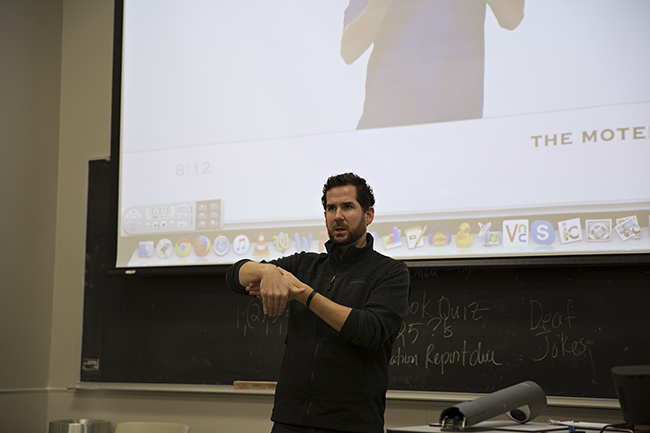 Beginning in fall 2016, American Sign Language will be offered as a transcriptable minor, providing UT students with a learning opportunity and a way to connect with a minority group in the Austin community, according to linguistics professor Richard Meier.

According to the 2010 U.S. Census Bureau’s American Community Survey, 48,763 people are deaf or hard of hearing in the Austin community, representing 2.8 percent of Austin’s  population, Meier said Austin has one of the largest deaf communities in the country because the city is home to the Texas School for the Deaf.

“It’s a major language of the community, just like Spanish is,” Meier said. “It’s one of the most widely used languages in Travis County, so there are career opportunities for students who learn ASL. … I think it’s an issue that the University needs to be thinking about, even as it develops the medical school: ‘How do we provide services for minority communities?’”

According to Amy Mulkey, communication sciences and disorders senior, ASL should be offered as a minor or a major like any other language.

“People have this misconception that ASL isn’t a real language, but it is,” Mulkey said. “Being able to major or minor in ASL would have helped me with my signing skills. Because I want to work with deaf students and co-workers in the future, being proficient in ASL would help me tremendously.”

Despite ASL’s growing popularity as a language course at universities around the country, a lack of funding and staff are two main obstacles to creating an ASL major, according to Meier.

“There hasn’t been a specific proposal [to turn ASL into a major], but we’ll see how many students are interested in a minor,” Meier said. “And if there is a lot of interest, that may be a strong argument for a major.”

“I tried repeatedly to get into ASL at UT but was unable to because the classes were always full by the time I could register,” Horton said. “Ultimately, I ended up taking ASL at ACC. If ASL is offered as a major at UT, hopefully there will be more teachers and sections available to students wanting to learn the language.”