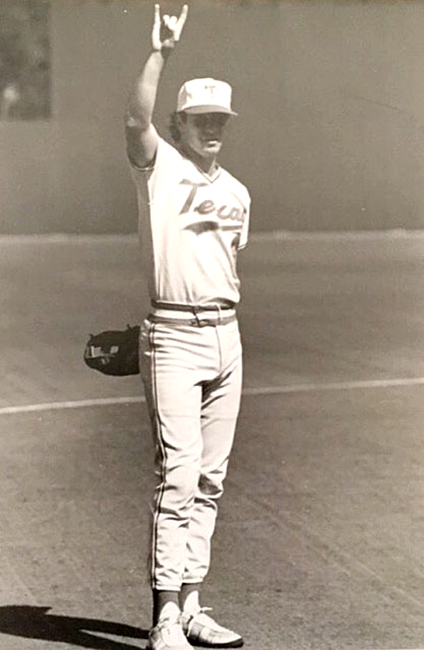 David Denny has plenty of reasons to want to visit his old stomping grounds at UFCU Disch-Falk Field.

The former third baseman is one of Texas’ most successful hitters. He helped bring Texas to the College World Series three consecutive years and set school records in career hits, doubles and RBIs that remain untouched 30 years later.

But now, when Denny returns to UT, it’s to watch his son Kaleb play on the same field he once thrived on.

“The memories I have are very fresh, and I’m able to tell [Kaleb] and share with him those memories,” Denny said. “Ideally, they make his experience now more memorable than mine because he’s getting to play through me again and then for himself and his teammates.”

Denny’s 1982–1985 teams are among the best in Texas history. Backed by Denny’s leadership and offensive spark, the 1983 Texas team won the school’s first national championship since 1975. Denny — now the head coach at Barbers Hill High School in Mont Belvieu — doesn’t take all the credit for his success.

“We played more games back in those days than they do now, and I had a lot of good players around me,” Denny said. “I may have individual records, but the majority of it was team-related.”

Ty Harrington, Denny’s former teammate and roommate, had a different perspective of Denny’s presence at the plate.

“From a player perspective, I don’t know that I’ve ever played with a guy that could roll out of bed, wipe the sleep out of his eyes, not put batting gloves on and get a hit,” Harrington said. “He had incredible hand-eye coordination and emotional strength to hit, and it’s unlike anyone I’ve ever played with.”

“Someone got his attention in the dugout because he didn’t realize it was his turn to hit,” Harrington said. “He grabs a bat, goes to the plate and just hits a double. I remember thinking, ‘That’s just not normal.’”

After leaving a legacy at Texas, Denny eventually settled into his high school coaching career. He said coaching his son at Barbers Hill was one of his favorite experiences, but he didn’t push Kaleb toward playing at Texas.

“Through the recruiting process, he emphasized that he wanted me to be my own person and that I didn’t need to follow him,” Kaleb said. “I grew up a Longhorn fan, my parents both went here, we watched Vince Young and all that type stuff growing up, so I wanted to come here whether he pushed me or not.”

Denny may be done coaching Kaleb, now a freshman outfielder, but he said he still looks forward to coming to see him play in Austin.

“It’s just fun watching, but at the same time I can stick my elbow in his ribs and say, ‘Hey, here’s how we used to do things,’” Denny said.