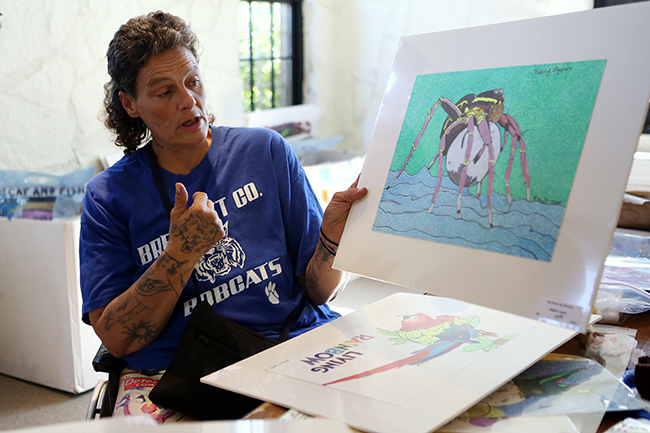 Penny Hunt arrived in Austin in 2004 with a mountain bike, two backpacks and what little remained of her salary from a job at a failed circus. Her surroundings were unfamiliar, but her situation was not. She had been homeless or at-risk since the age of 10, and now, once again, she found herself without a place to stay.

Hunt had always had a passion for art, and soon after her arrival, a friend took her to Art from the Streets, a nonprofit organization that provides homeless or at-risk artists with the opportunity to make and sell their art. There she was given the materials to continue painting and drawing. Eleven years later, Hunt is preparing to sell her work at the organization’s 23rd annual art show on Dec. 5 and 6 at the Austin Convention Center.

“I just love, eat and breathe art,” Hunt said. “[Art from the Streets] helps me a lot because I can borrow money throughout the whole year against my artwork. Plus they’ve been getting more involved in the last couple of years with more shows for us, putting us in auctions and other places. For somebody like me that wants to get recognized, that helps. The more exposure the better.”

Art from the Streets began in 1991 as an avenue for homeless artists to hone their talents and make money by selling their work.

From its roots as a small annual show with only 70 pieces of art, the organization’ has grown to include more than 75 artists who produce thousands of works this year alone. Three days a week, volunteers and homeless artists converge at the Trinity Center at St. David’s Hospital to create art.

“Sometimes our workshop is the best human interaction they’re going to have all day,” said Kelley Worden, the executive director of Art from the Streets. “That’s definitely evolved with our volunteers because they’ve connected with the artists. We’ve created a community.”

At this year’s show, Hunt will display a collection of roughly 60 drawings, many of which depict animals surrounded by bright backgrounds. Hunt has participated in 11 shows since joining Art from the Streets, even creating and selling art while in jail. During her time in jail, she submerged Skittles in water to make watercolors and used Q-tips as paintbrushes. Hunt, who is currently homeless and uses a wheelchair after breaking her leg, said the artists of Art from the Streets represent a spectrum of homelessness that defies stereotypes.

“A lot of people are not aware that there are different types of homelessness,” Hunt said. “The hobo that’s drunk and rides the rails and goes from place to place and sleeps in your doorway ­— it’s not that person no more. Now you’ve got whole families, old women that should be enjoying their SSI, and they can’t because they’re working at McDonald’s because they don’t have enough money. People like me who are hurt and don’t have enough money to get inside.”

Art From The Streets does not provide any formal training for the artists, many of whom rely solely on talent and acquired techniques. UT law professor Jane Cohen, a member of Art from the Streets’ board of directors and an avid collector of the organization’s artwork, said she enjoys the range of styles on display at the shows.

“The art from Art from the Streets is just incredible because it’s filtered through a lot of imagination and life experience,” Cohen said. “There’s a lot of exuberance and real energy.”

At the show, the artists will be available to converse with customers who are purchasing their work. Hunt said she hopes this dialogue will make it easier for people to approach the homeless in their everyday lives.

“We’re human, too,” Hunt said. “Just because we’re homeless doesn’t mean we’re not human. We have dreams and ambitions and hopes like everyone else.”