History of what Americans gobble down on Thanksgiving 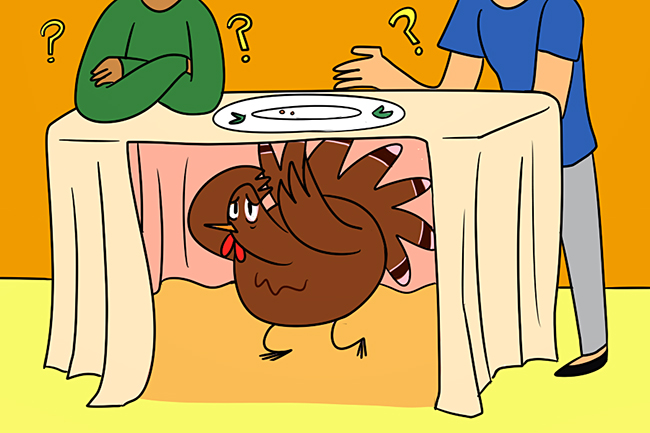 School children have been making red and brown paper handprint turkeys for decades — but the turkeys that Americans eat on Thanksgiving aren’t the colorful birds many people imagine them to be.

The Thanksgiving turkeys sold in stores are huge, white and bred for specific marketable traits, and they don’t look much like the traditional image of turkeys at all. Turkeys have been selectively bred for years to produce animals with more muscle meat and faster growth rates, a practice which is good for production but has some questionable effects on the birds themselves.

“Turkey production was in deep decline [at this time] because the birds tended to be too big for smaller families, and even more important, the day's smaller refrigerators and ovens,” Williams said.

In response, breeders began choosing birds with desirable traits, such as specific sizes and lighter-colored feathers, and breeding them. Through this selective breeding process, scientists and turkey farmers developed a new breed of turkey — the Beltsville Small White turkey.

As the food needs of Americans changed, so did the turkeys, and different varieties were bred to meet popular demand. As time passed, the population grew, and refrigerators and ovens became large enough to handle more food. Today, the primary type of turkey sold in America is the Broad Breasted White turkey, a fast-growing white turkey that typically weighs around 40 pounds.

Some turkeys have trouble walking because of  their size, and some suffer from deformities caused when their muscles grow faster than their bones. Many turkeys can’t even mate because of their exaggerated proportions.

“Most farm animals of all types are now bred by artificial insemination,” said Williams.

The National Turkey Federation said selective breeding is a positive practice designed to produce birds with better health, taste and appearance. But philosophy senior Jacek Prus, resident of UT student organization Students Against Cruelty to Animals,  said he is uncomfortable with the commercialism of the practice.

“The farmers think, ‘Oh, that’s what people want, so we’ll go to any means to create profit,’ and when profit becomes more important than living beings, these people have the wrong incentives,” he said. “I don’t think they see what’s really more important. They’re just clouded by the economical mindset.”

Headlines and biology textbooks alike proclaim that “Science has Built a Better Turkey.” But Prus said better is subjective.

Prus’ organization recently held a food tasting event in collaboration with the Division of Housing and Food Service that offered several vegetarian and vegan Thanksgiving options.

Darla Stewart, associate director of projects and procurement with DHFS, said the turkeys served at UT dining halls are bought from suppliers endorsed by the American Veterinary Medical Association and the National Turkey Federation.

“We do strive to make every effort to make sure that we are buying higher quality product by companies that abide by sustainability standards for the better of our students,” Stewart said.

“They are completely different concepts with a completely different objective,” Williams said. “Selective breeding is practiced to have positive effects on the turkeys — there’s no reason at all for a farmer to raise an animal that would not have the best health, proportions, size and appearance that’s desired to produce wholesome food.”