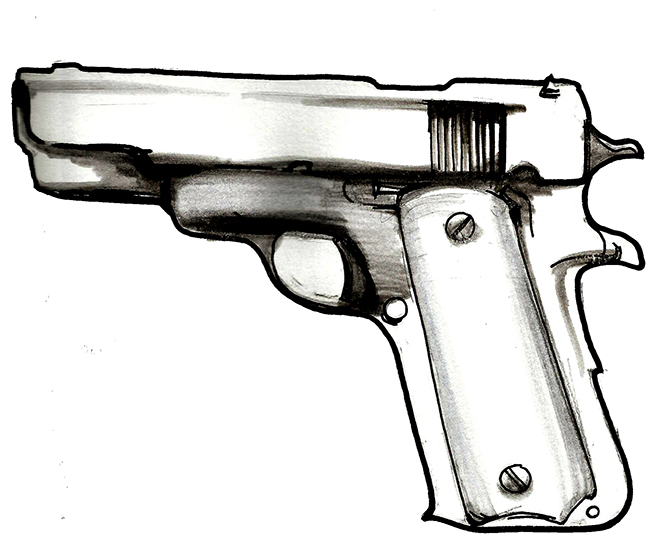 Learn the laws. Shoot the Gun. Be Safe. These are the lessons taught in a Texas-based concealed handgun license course.

For those interested in obtaining a license to carry a firearm, the Department of Public Safety requires the successful completion of an approved class taught by a licensed instructor. South Austin-based Central Texas Gunworks offers these six-hour courses most Tuesdays and Thursdays for anyone approaching or over the age of 21.

I spent one Tuesday taking the six-hour course, learning about the Texas penal code, conflict resolution and gun safety. The in-classroom portion took about five hours. During this time, instructor Michael Cargill lectured on gun rights, using infographics and videos. To relate conflict resolution, Cargill played videos of various situations and asked participants how they would respond. Many of the participants, including myself, misinterpreted what was depicted. The exercise allowed those in the class to better evaluate conflict, reducing the chance of acting improperly in real life.

The final portion of the classroom section focused on gun safety. Many of the examples of improper gun handling in videos occurred in the hands of supposed gun experts. Cargill said these videos were meant to teach that accidental gun discharge can happen to anyone, and that safe gun practices require constant practice. The class ended with a 25-question test required to receive a CHL certificate and become eligible for a CHL license.

“People are usually surprised about the things that they cannot do,” Cargill said. “I’ll actually get people who will get up after the first hour, leave and not come back.”

The Texas Penal Code’s handbook on gun law covers self-defense laws, accidental injury to others and locations where guns are prohibited. Cargill said that license holders carrying a concealed handgun cannot consume alcohol to any degree. He also said certain rights to self-defense may apply at night but not during
the day.

Participants spend the final hour of the CHL class at CenTex Gunwork’s shooting range to determine handgun proficiency. Cargill said the shooting portion of the class is not designed to teach someone how to shoot and those interested in learning the basics should take a beginner course. Cargill said he has occasionally recommended to the Texas DPS that class participants who respond in an alarming manner during instruction or improperly use their handgun not receive a CHL.

“The hardest part of the process is teaching people when not to pull their gun,” Cargill said. “It’s a very easy concept to get someone to where they can get that gun and where they draw it. We have to make sure they understand that their gun is their last option.”

UT alumnus Rob Nowicky, who works for Central Texas Gunworks, said he obtained his concealed handgun license after 2010 when an active shooter, Colton Tooley, died by suicide in the PCL with an AK-47 rifle. He said he hoped to regain his sense of security.

“I was really scared when it happened,” Nowicky said. “My roommate was on campus at the time, on lockdown, he was completely defenseless.” Cargill said he fully supports the campus carry legislation going into affect on Aug. 1. But he said he hopes to alleviate some of the confusion about what the legislation actually means for students.

“This is about getting rid of the no-gun zones,” Cargill said. “This is not about stopping a massacre or anything like that because those are so rare. This is about you or that person being able to protect themselves while traveling from home to school and back home.”