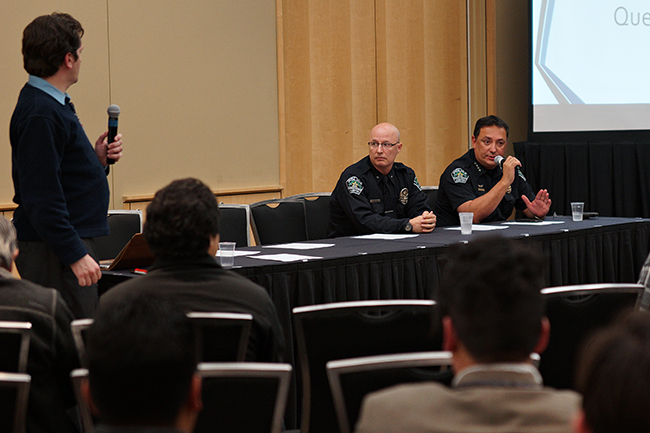 Representatives from the Austin Police Department held a public meeting Monday night to inform citizens about their continued efforts to equip officers with body cameras.

APD held this meeting to inform the public about how the recently passed Senate Bill 158 will affect the police and their interactions with the public. Austin Police Chief Art Acevedo and Austin Police Commander Eli Reyes explained key parts of the law, including how the department plans to implement the body cameras, who will have access to the footage and how the footage can be used.

Acevedo said he believes the body cameras will help the police department fulfill its duties.

“Body cameras, I do not think … are a perfect solution to create perfect law enforcement,” Acevedo said. “I do think [law enforcement is an] imperfect profession, just like the human condition is imperfect, and society is imperfect. However, I do think it’ll be a great tool, most importantly for transparency.”

APD has been working toward providing their officers with body cameras for at least four years. Body cameras were first tested in 2011. However, because of poor technology standards and privacy issues, they were not implemented at that time, according to Acevedo.

During their presentation, Acevedo and Reyes said the department hopes to have its first set of 500 body cameras in use by the end of the fiscal year. More deployment is estimated to occur during next summer, starting with officers who work in the downtown area.

Though the department has yet to decide on a specific vendor for the cameras, their requirements for the cameras are for them to have remote triggers, at least a 10-hour battery life, the ability to categorize videos, the capacity to visually record what officers see, editable videos and security features including audit trails and watermarks.

Government sophomore Travis Clark questioned who would retain the rights to footage collected by body cameras.

“Who will have access to the footage?” Clark said. “And what will be the consequences for leaking the footage?”

Reyes responded to Clark’s question, saying only law enforcement and prosecutors will have access to the footage until all investigations and trials are over.

“Illegally releasing the video is a criminal violation and a Class A misdemeanor,” Reyes said. “If an officer or a member of the department inappropriately releases the video, they would be held accountable for that.”

Acevedo added to the answer, saying if any peace officer is convicted of a Class A misdemeanor, they would also lose their position on the force.