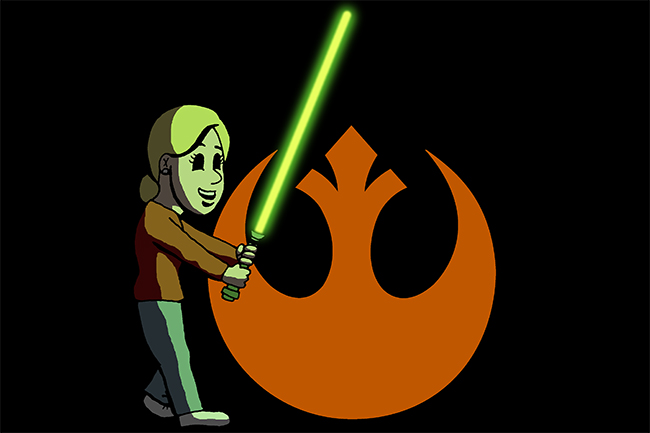 Although Longhorns are counting down the days until Christmas, some are eagerly waiting to return to a galaxy far, far away.

The upcoming sequel in the “Star Wars” saga, “The Force Awakens,” comes to theaters Dec. 18. While fans are anticipating for the return of their favorite film franchise, some wonder if director J.J. Abrams’ take will live up to the original films. Radio-television-film junior Elizabeth Valoon said the first Star Wars film she saw in theaters was “Revenge of the Sith.” Soon, she became hooked on the series.

“Watching the films was an experience that made you fall in love with the characters and the world,” Valoon said. “It’s one of the best examples of storytelling that I think exists.”

Gabriel Gaucin, radio-television-film and computer science junior, said one of the reasons he’s enjoys “Star Wars” is because of his love of screen writing. The series’ arc about the fall and redemption of Anakin Skywalker is one of his inspirations for being a writer.

“The series influenced the types of stories that I like,” Gaucin said. “I look at ‘Star Wars,’ and I see that it’s important to really understand the story you’re trying to tell and how to best show that on screen.”

For many film students looking to leave their mark in the cinematic world, “Star Wars” became an inspiration. The movies’ knack for building hype and gaining legions of followers has student filmmakers hoping to one day craft a similar cultural phenomenon.

“[‘Star Wars’] made me want to make movies people get excited about — the type where people would wait in line for days,” Valoon said.

The 2012 announcement of “The Force Awakens” sparked Valoon’s excitement for the franchise’s return. She said while some had a negative reaction to yet another sequel to “Star Wars,” she personally “thrives off of sequels.”

“I might have cried,” Valoon said. “I was so excited to be alive and studying film at the time a new movie is coming.”

Rachel Steinkamp, a theatre and dance and journalism senior, loved the movies ever since watching them on VHS. She plans to honor the series by decorating her graduation cap with the popular quote from “The Empire Strikes Back” — “Do or do not. There is no try.”

“I think they’re great movies to watch to pretend you’re out of this world,” Steinkamp said. “I loved the science-fiction fantasy and the escapism. I think a lot of it is relatable to audiences.”

“The Force Awakens” has created serious hype, but the fact that it’s the first “Star Wars” sequel in a decade has caused fans to wonder if it will match the critical prestige of the original trilogy. Steinkamp said she’s worried the new film will bear too similar a resemblance to the first three movies.

“The rumors I keep hearing is that they’ll kill off someone like Han [Solo],” Steinkamp said. “If they do that in an incorrect way or kill off a wrong character, I feel that’ll reach a really sour note.”

Whatever the reaction to “The Force Awakens,” it’s unlikely that the series will conclude anytime soon. As long as fans are interested in the franchise, Gaucin said it will keep going. He said a new start for the franchise gives newcomers an opportunity to become invested.

“There are so many stories in the universe that could have their own series of films,” Gaucin said. “I think [“The Force Awakens”] can bring a new generation of fans into the ‘Star Wars’ world.”