The rejection of Syrian refugees by state politicians is immoral 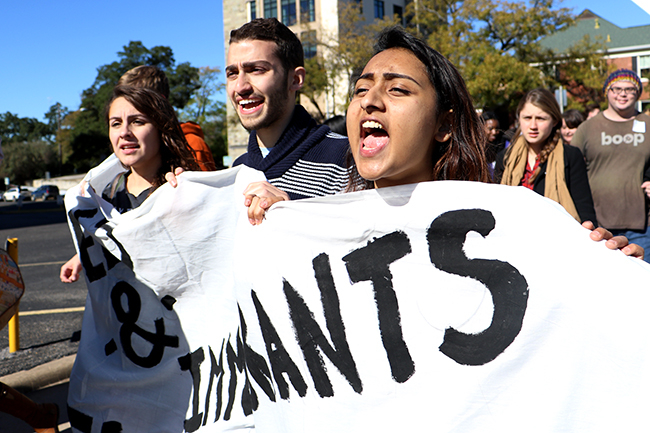 The recent terrorist attacks on Paris unleashed a tsunami of backlash that revealed Western politicians’ hair-trigger anti-Muslim sentiments. Despite the fact that all of the terrorists in the Paris attacks were European citizens, the Syrian refugees will bear the cost of the attacks.

Gov. Greg Abbott announced Nov. 16 in a letter to President Obama that he will not allow any Syrian refugees to settle in Texas in light of the Paris attacks. Since then, more than half of American governors have made the same decision for their own states.

But brimming local support for refugees shows that popular opinion does not necessarily reflect the governors’ callous decisions. An initiative to block Syrian refugees from settling in Austin died in a City Council committee Monday, and hundreds of people marched on Nov. 22 to the Governor’s Mansion in protest of his rejection of refugees.

Those who support Abbott’s decision should understand that the process for screening refugees is one of the most stringent for any immigrant entering the U.S. So much so that out of 784,000 refugees admitted to the United States since 9/11, only three were ever linked to any terrorist activity, and none of those admitted have ever committed an act of terrorism on American soil.

Last week’s Planned Parenthood shootings prove that we have a much more urgent domestic terrorism problem, often fueled by the vicious and exaggerated rhetoric echoed by the same politicians who want to reject all Syrian refugees.

In terms of the effect of refugees on the national economy, it has been proven time and time again that any type of immigration boosts the economy in the long term, even after the short-term cost
of relocation.

All of these statistics prove that xenophobia and racism fuel the rejection of Syrian refugees, rather than any security or economic concerns.

This is not to mention Abbott’s rejection of all refugees reeks of World War II-levels of intolerance, when Congress, backed by public opinion, rejected 20,000 Jewish refugee children trying to flee Germany, and more than 900 Jewish refugees were forced to turn around when their boat reached American shores. Two hundred and fifty-four of them eventually died in the Holocaust.

The horrific situation in Syria is no different, if not in scale, than it was for the Jewish people in Europe in the second World War. Since the Civil War started, over 28,000 civilians have died in the war and have become the target of bombings and other violence in their country.

Government junior Nali Shah attended the recent protest against the rejection of Syrian refugees at Gov. Abbott’s mansion. She said she believes we have a duty to help save their lives by accepting them at our front door.

“We cannot and should not persecute the persecuted,” Shah wrote in a Facebook message. “We have a responsibility to help those who seek refuge at our door, not because we are the ‘world’s police,’ but because we’re united in the same strugglefor humanity.”

Most refugees simply dream to live in a peaceful country where death doesn’t follow them around every corner. The politicians trying to reject them indiscriminately should be publicly shamed for their actions.

Preventing refugees from entering our country when accepting them comes with little cost and no danger to us is morally impermissible.