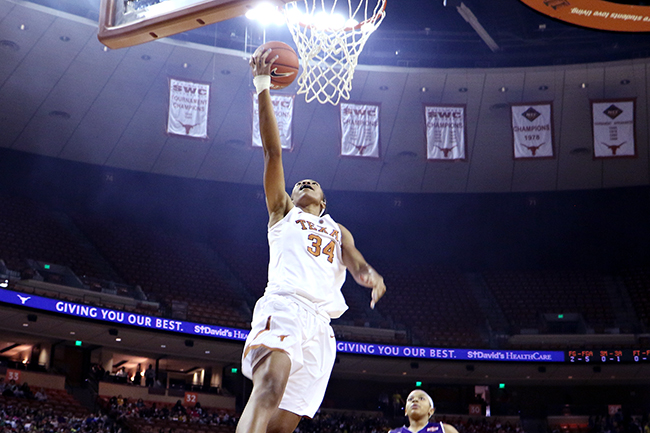 Texas beat its second consecutive top-10 opponent Wednesday night. The No. 6 Longhorns knocked off previously unbeaten No. 9 Mississippi State with a 53-47 win at the Frank Erwin Center.

The two teams combined for 42 turnovers in a game that head coach Karen Aston said looked like a football game.

“It was an ugly offensive game,” Aston said. “We just couldn’t get into any flow.”

The Longhorns (6-0) shot 39.1 percent from the floor while the Bulldogs mustered a season-low 31.5 percent shooting.

Mississippi State (5-1) head coach Vic Schaefer said his team was a few adjustments away from beating Texas in its own house.

“If we could redo out-of-bounds defense and make five more free throws, we win the game,” Schaefer said. “But that’s why they call it the road. You don’t shoot as well on the road.”

Texas shot almost as poorly as No. 9 Mississippi State did from the free-throw line. The Longhorns connected on 15 of 26 shots from the charity stripe, and the Bulldogs made 11 of 20.

Senior center Imani Boyette finished with a game-high 21 points and 10 rebounds. The 6-7 post player made more than half the team’s free throws, going 9-of-12 from the line. Still, Boyette said she needs to be better.

“I thought I did horrible,” Boyette said. “I think we as a team don’t think we are shooting well from the free-throw line. We have to have a higher standard for ourselves.”

Boyette muscled in a layup with 13 seconds left in the first quarter to double Mississippi State, 18-9, heading into the second.

She then completed her first of two three-point plays in the second quarter to give Texas its first double-digit lead at 21-11. Mississippi State clawed back to 32-28 midway through the third quarter before Boyette drove to the lane on a give-and-go play.

She made the bucket and sunk the foul shot, propelling a 9-2 Texas run that left the Longhorns up 41-30 at quarter’s end.

Junior guard Brianna Taylor made the game’s first 3-pointer with 7:36 remaining in the contest. Taylor laughed when asked if the shot was one of the biggest of her career, but Aston said it was significant.

“I’ll say it was a big shot because I know I took a deep breath when she hit that,” Aston said. “It felt like we needed a bucket at that point. It was pretty big.”

Later in the quarter, Boyette crashed to the floor on a hard foul. She managed to nail both free throws, and Texas once again led by double figures, 53-43.

The Longhorns failed to score after, but 53 points proved enough on a night when points were at a premium.

Texas travels to Arkansas on Sunday to take on Little Rock at 2 p.m. The Longhorns return home Dec. 13 to play their third ranked opponent in four games, No. 16 Stanford.