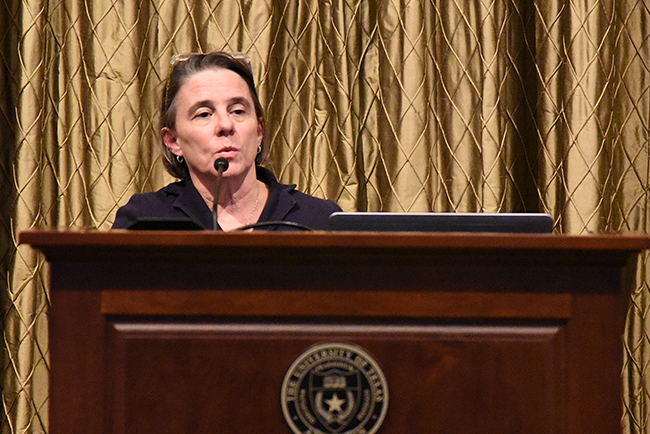 Only a handful of members of the University community attended the first public forum hosted by the Tuition Policy Advisory Committee on Wednesday. Exactly one student spoke to express concern about the recommended tuition increase during an opportunity for student feedback.

“I think there’s a combination of factors — finals week, and then it might suggest some sentiment to the $150 increase — I don’t know,” Student Government President Xavier Rotnofsky said of the low attendance.

While tuition committee members were present to listen to student feedback about the recommended tuition increase, interim University CFO Mary Knight said the committee planned public forums to help explain why the recommended increase is necessary.

“It’s really just to give information on the current budget situation … so that hopefully students will understand the need,” Knight said.

Knight began the event with a presentation about how inflation and falling state contributions since the last tuition increase in 2011 have led to a budget deficit of around $40 million.

Around 30 individuals were present in the presentation room, including the 10-member tuition committee, Daily Texan staff, audio-visual staff and other university officials.

After Knight’s presentation, a student in the audience asked for clarification about the possibility of additional state funding or contributions from Texas Athletics.

The student, who declined a follow-up interview request, also raised concerns to the committee about the tuition policy process.

“I think this feedback is going to a trash bin,” the student said at the forum. “The numbers so far have been very sympathetic to the institution.”

Student Government Vice President Rohit Mandalapu said committee members have been reviewing the 1,200 online responses as well as feedback from previous presentations by the committee at legislative student organizations. He said the online feedback shows low attendance does not necessarily signal student apathy.

“You have to also look at the amount of responses online,” Mandalapu said. “Overwhelmingly students aren’t in favor of a tuition increase, but they understand the necessity for one.”

Rotnofsky and Mandalapu encouraged students to voice their opinions to both the tuition committee as well as the Texas Legislature.

The committee will meet with President Fenves to discuss feedback from the forums before he submits his recommendation to the UT System next week. The second and final forum will be held Thursday at 10 a.m. in the Main Building.