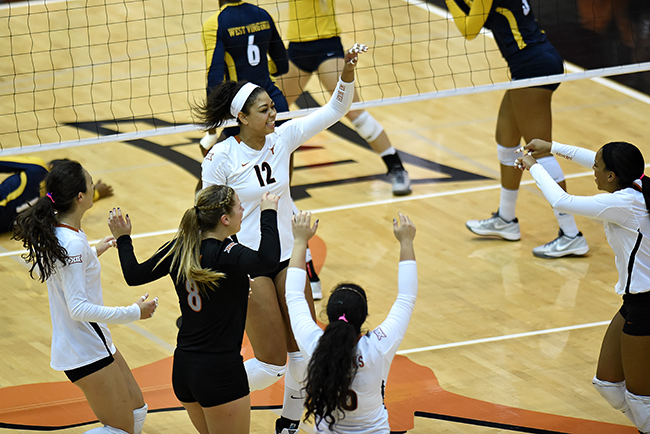 No. 3 Texas will host the first two rounds of the NCAA Tournament in Gregory Gym this week. The scheduling sounds like a broken record for many in the program. For freshmen Morgan Johnson and Yaazie Bedart-Ghani, though, Texas’ first-round match against Fairfield on Thursday will be a new experience.

“Honestly, it’s like a dream coming true,” Johnson said. “I might’ve been (Texas’) No. 1 fan growing up. I never thought I would be with this team, and actually being here is like ‘Wow, I’m really lucky.’”

Johnson and Bedart-Ghani have taken ownership of their roles this season and filled various roles to help the team. Each was recognized with a Big 12 Rookie of the Week award. Bedart-Ghani also made the All-Big 12 Freshmen team behind her .305 hitting percentage and 44 blocks.

“We’re so proud of them,” junior outside hitter Paulina Prieto Cerame said. “They’ve done a really good job doing whatever we ask, and they’ve never complained.”

The freshmen look to help Texas’ offense against a solid Fairfield (21-9, 14-4 MAAC) defense. In addition to 241 blocks this season, the Stags average 17 digs per set.  Four Fairfield defenders have surpassed 300 digs. Sophomore outside hitters Skyler Day and Megan Theiller lead the Stags offensively with 411 and 327 kills, respectively.

Fairfield is a young team with no seniors and nine freshmen, but it enters its first-ever match against Texas riding momentum from a 12-game win streak. Two freshmen and Theiller hail from the Lone Star State.

Although Texas has just two freshmen, they say they don’t mind a quick turnaround and stiff competition. Johnson’s hopes extend past this week — she wants a national title run.

“I think this is our year,” Johnson said. “I have a lot of confidence in us. We just have to be ready to play the best game of our life every single time.”

“We’re letting them know we’re confident in what they can do,” Elliott said. “We’re counting on everybody to play at a high level. We’ve said from the very beginning that in order to win a championship, you need freshmen to be a part of it. They’re embracing that, and they understand that.”