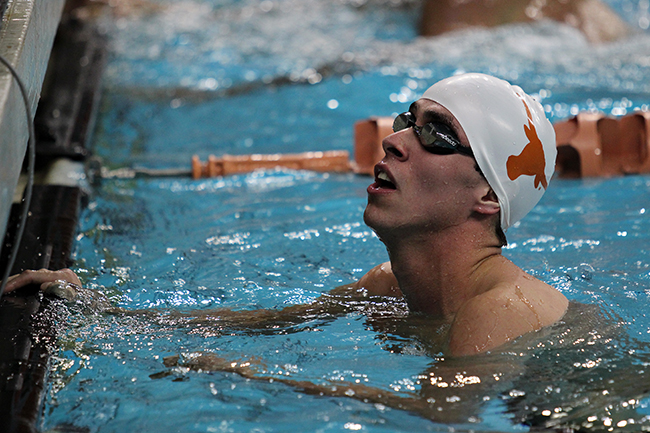 There was a noticeable excitement in the Lee and Joe Jamail Swimming Center on the first day of the annual Texas Invitational.

Teams from eight schools gathered around the pool deck loudly cheering for the teammates competing in the Wednesday’s finals — the 800m freestyle relay for both men and women.

Head coach Carol Capitani said she is impressed with the freshmen talent this year, showcased on the relay team.

“They’re big on talent and also big in numbers,” Capitani said, “Those eight — everybody’s making an impact, so that’s a lot of fun.

On the No. 1 men’s squad, the “B” relay featuring junior P.J. Dunne, senior Sam Lewis and freshmen Jeff Newkirk and Ryan Harty, took third in 6:25.93.

An early exchange caused the men’s “A” relay to be disqualified.

Head coach Eddie Reese gave insight on the details of the team’s preparation for the meet.