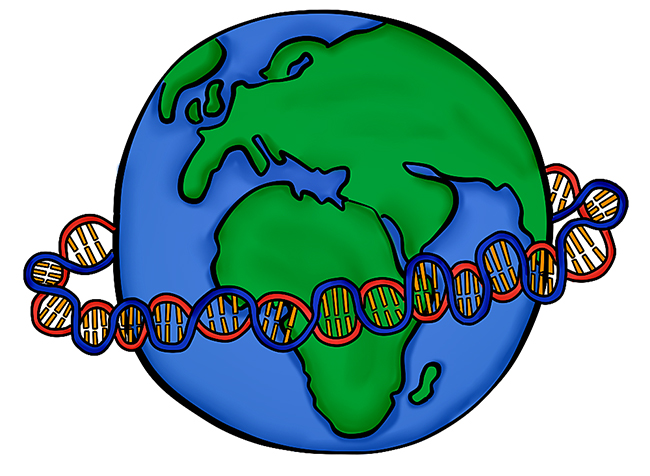 Editor's note: This article is part of a package about diversity on campus. Click here to read the other stories.

There was no way to distinguish one ethnicity from another when scientist J. Craig Venter’s team of geneticists first sequenced the full human genome in 2000.

“The concept of race has no genetic or scientific basis,” Venter said in a speech at the White House.

It seemed like the latest evidence in the field of genetics had finally confirmed what social scientists had been arguing for decades. Race was a social construct that had no biological basis and worked to reinforce the social order — but many geneticists quickly rose up in opposition to Venter’s statement.

In a New York Times article “A Family Tree in Every Gene,” Armand Marie Leroi defended the use of race by medical researchers to predict their genetic makeup.

He said race is a fairly accurate indicator of a person’s genetic ancestry and a person’s genetic makeup can predict their response to certain treatments or their susceptibility to particular diseases. In 2005, the U.S. Food and Drug Administration approved BiDil, a heart failure medication for African-American patients and the first drug ever developed for a specific race.

Certain researchers insist that race is based on genetics because human genetic diversity patterns on geographical regions, which sometimes correspond with American delineations of race. Modern humans first evolved in Africa, before a small group left the continent and slowly spread throughout the rest of the world.

Humans vary only slightly at the DNA level — about 0.1 percent of DNA varies between any two people, according to a study in Nature Genetics. Of this small amount of genetic variation, most occurs between individuals living within the same populations, whereas only a small amount occurs between supposed racially distinct groups. Studies that have tried to demonstrate a genetic basis for race have focused on the small percentage of variation between populations.

Since genetic differences can be mapped over prehistoric human migration patterns, genetic features cluster in particular geographical areas. Because traditional concepts of race are related to geographical origins, they sometimes correspond with these genetic patterns, making it inaccurate to state that race is biologically meaningless. However, the correspondence of racial groups onto geographic patterns of genetic variation is often tenuous.

According to a study in Nature Genetics, samples used in analyses are usually collected from individuals living in native populations that haven’t had much recent contact with each other, such as Europe and East Asia. This makes their genetic differences cluster neatly according to geographic origin. But when researchers add a sample of South Indians, who occupy an intermediate geographic position between Europe and East Asia, there is considerable genetic overlap among all individuals. The South Indian individuals do not fall neatly into one of the categories usually conceived as a ‘race.’

Human genetic variation is never interrupted, so when studies try to define clear-cut racial lines they run into a lot of issues. It’s comparable to differentiating between colors in a spectrum. Distinguishing red from blue wouldn’t be much of an issue, but drawing a line between red, purple and blue can be troublesome.

Those choices are not totally arbitrary or biologically meaningless, but the facets of race that become important in a particular society depend on the interactions between that society’s members.