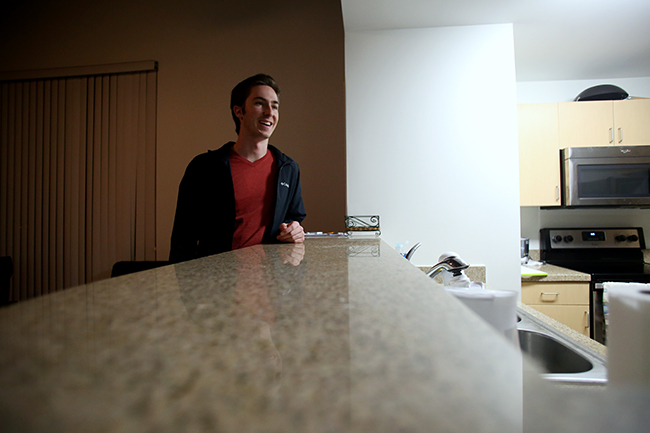 Grant Kjeldsen moved into 2400 Nueces at the beginning of the fall semester because a friend offered to give him all of his furniture if he took over his lease. The finance junior loves the building, and said one of his favorite parts about his apartment is the natural lighting.

“I hardly ever have the lights on during the day because there are such great windows,” Kjeldsen said. “I don’t notice a huge difference in heating and cooling; I don’t see the bills. But the biggest part for me is the lights — having daylight all the time is useful.”

2400 Nueces is considered the greenest complex in West Campus, according to a rating system established by the Austin Energy Green Building program.

AEGB designated 22 buildings in West Campus as one-star developments in the program’s most recent rating, which still means the building developer may have gone beyond basic city requirements for construction. It’s very difficult to achieve a high rating on the AEGB scale. The program rated 2400 Nueces four stars on their efficiency and sustainability rating system, the highest score out of the 34 multifamily complexes rated in 2015 in West Campus.

AEGB scores buildings on a point system. Buildings can add points to their total score by installing water efficient appliances, having efficient cooling and heating systems and so on. Basic city requirements for construction do not count toward points, and buildings must tally up at least 29 points before breaking into the next level: two stars. While this program exists to encourage sustainable development, there are still no real incentives for developers to exceed basic requirements beyond standing out in the housing market, said Heidi Kasper, the administrator of green building and sustainability at Austin Energy.

West Campus apartment buildings hardly advertise environmental standards. If they do, they do not promote their sustainability rating as the main selling point, said Ross Colley, a realtor at West Campus Living. The most important factors are location and cost.

“They just want to know what it looks like and how cheap it is,” Colley said.

Though cost is the biggest factor when apartment shopping, most people fail to consider the cost of utilities in their overall rent, which can make the biggest difference in price, Kasper said. Renters need to understand that different buildings may have different utility costs, she said.

“Unless people are going to demand [efficiency] from apartments they choose and considering that when they are looking for an apartment, the value to a developer is reduced,” Kasper said. “We need smart owners, ones that want to live in green buildings.”

2400 Nueces charges residents an all-inclusive rate, which covers water, electricity, cable and Internet. This adds a competitive edge to their place in the student housing market, said Lawrence Briggs, the complex’s leasing and marketing manager. The electricity is capped, but residents rarely use more than their allotted energy per month. The building’s sustainability and efficiency is mentioned in tours of the building, but most people are drawn to the apartment because of its location — two blocks from the edge of campus, Briggs said.

Kjeldsen pays $1,029 a month for his two-bedroom, two-bathroom apartment, but he is moving on because of price increases. 2400 Nueces has some of the highest rental rates in West Campus, but filling his vacancy won’t be hard — the complex always leases out quickly, Briggs said.

Building for efficiency and sustainability does not always cost a lot, but some parts of efficient and sustainable development are quite expensive, Kasper said.

“The sad part is if the developer pays for really high-efficiency air conditioning units, even if they are owning and operating the building, they are not seeing the direct impact on their line,” she said. “Residents are. [There will be no change] until residents start understanding there is a total cost to ownership.”

AEGB, an Austin Energy program, rates buildings in the entire Austin Energy Service Area, which does not completely coincide with city limits but essentially covers the city. AEGB predates the Leadership in Energy & Environmental Design (LEED), the national green building certification program that recognizes best-in-class building strategies and practices, according to the LEED website. AEGB was the first green building program in the country. The organization started in 1990, and actually inspired LEED, Kasper said. 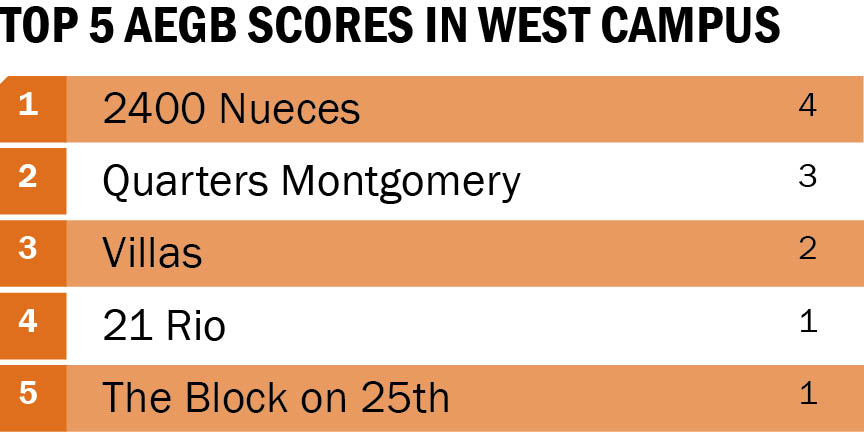 While LEED exists in Austin, AEGB still takes their rating system very seriously because having local ratings is advantageous, Kasper said. The program is tailored to Austin’s climate and keeps in mind other local initiatives when revising their rating system.

“We have points in our ratings aligned with Imagine Austin plan,” Kasper said. “You won’t see that in LEED.”

The rating system gets progressively stricter, and AEGB raises the bar about every three years. The baseline of what Austin requires in a building is already fairly efficient, Kasper said.

“Building up to code in Austin is pretty efficient,” Kasper said. “Projects coming to us have to do better than that [which is] relatively achievable. Everything we do on the one star is meant to be achievable with a little work and thought.”

West Campus apartment buildings’ ratings have improved with the years, even if their ratings haven’t, Kasper said. She could only remember a few five-star projects in recent years, and those were developed by owners aiming to own their buildings for the long haul and had the incentive to build more sustainability to cut down on maintenance and increase durability.