10 years later: A look back at the year after Vince Young 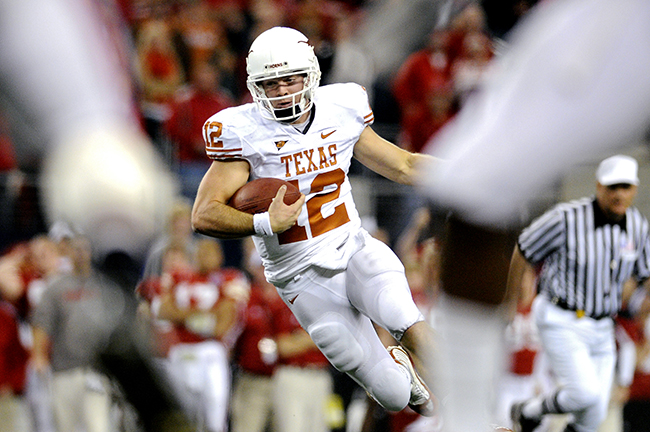 Editor’s Note: Killian wrote for The Daily Texan from spring 2004 to spring 2008, served as the sports editor during spring 2007 and was a member of the original Double Coverage staff.

The 2006 season started with expectations that, while sky-high by present standards, seemed subdued at the time. The Longhorns were defending national champions, but their quarterback had left for the NFL. In my first year covering football for The Daily Texan, I summed up the feeling surrounding the team: “Texas football is entering its 113th season, but with the early exit of already-legendary Vince Young, it seems time to reset the count. This is 1 AVY, the first year after Vince Young.”

The start of 1 AVY turned out to be the beginning of another era — the Colt McCoy era. Few thought the Longhorns could repeat without Young. But general consensus was that, just maybe, if they could beat Ohio State in their second game, they might have a chance.

I arrived at the Texan in the spring of 2004.  While thrilled to get the men’s golf beat, my goal from the very beginning was to cover the football team. After working my way up from men’s golf to women’s swimming to softball to women’s basketball, I finally arrived.  The season was one to remember.

McCoy cemented the starting job on opening day. The Longhorns beat North Texas 56-7 to set up a showdown with Ohio State. It was my first big game to cover and witness. The press box was full of nationally known sportswriters, and I wisely put my head down and pretended I belonged.

I didn’t get caught up in the excitement, likely because there was little to get excited about. The Longhorns lost 24-7 in a game that never felt competitive.

Once Ohio State was in the rearview mirror, the team and I settled into a routine. I attended media availability sessions during the week, wrote a preview and an extra story or so to help fill out Double Coverage at the end of the week, and then recapped a Texas win in Monday’s paper. Texas did the winning part. For the first seven weeks, we didn’t even leave the state of Texas.

The team’s first genuine road trip was in October, when the Longhorns played Nebraska. The game is something of a classic. Redshirt freshman walk-on kicker Ryan Bailey came off the bench to kick a game-winning field goal, but I’ll always remember how the game tested sportswriters. Memorial Stadium had been dusted with snow intermittently during the game, and it fell even as Bailey prepared to kick.

A game-winning kick in the snow? That’s drama.

And then it stopped.

Even as I recorded the snow’s end in my notebook, I wondered who among my colleagues might spice up the event with a dash of falling snow.  At least one did.  But, that’s not the way it happened.

Texas was on the road again the next week and didn’t slow down, notching a dramatic 35-31 win over Texas Tech. The Daily Texan sportswriting team, however, nearly ran out of gas on the drive to Lubbock.

After a win the next week, the Longhorns were 9-1 and ranked fifth in the BCS standings. When No. 3 Louisville lost the following Thursday, a BCS berth seemed realistic. Then, in a bit of foreshadowing, McCoy injured his neck sneaking into the end zone for an early score against Kansas State. The Longhorns lost that game and then lost again the next week to rival Texas A&M. A win in the Alamo Bowl made it a ten-win season, but like 2009, we’ll always wonder what might have happened if McCoy hadn’t been injured.