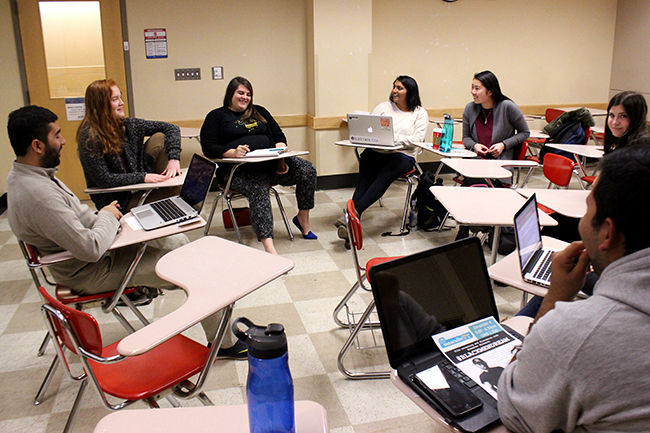 Around 10 UT students joined a worldwide discussion aimed at combating gender-based violence across college campuses. Only two of them were males, including the
male co-host.

In support of the United Nations Secretary General’s 16 day campaign to end violence against women, UT students sat in a circle Thursday to brainstorm solutions to fight sexual assault on college campuses as part of the first global gender equality campaign by UN Women — #HeforShe — held at universities worldwide. Erin Burrows, Health Education Coordinator for Voices Against Violence, also participated in the discussion.

“One in four women in the US experiences sexual assault on campus,” co-host neurobiology and government senior Taral Patel said. “The number is twice [as high] for the LGBTQ community. More than 90 percent of sexual assault cases are left unreported.”

“Sexual assault is never the fault of the survivors,” Burrows said. “We also don’t require students to report to the University or the police to work with VAV.”

Burrows said people often lack open, honest conversation with no assumption, or aggression, or sense of possession over someone else’s body in regards to consent. Research shows offenders in cases of sexual assault tend to be repeat offenders, and most sexual violence happens between people who know each other, according to Burrows.

“We have to make the clarification that rape isn’t sex – rape is violence,” undeclared freshman Ashton Sauseda said.

Patel, who is also the Student Government chief of staff, discussed SURE Walk — an SG-run volunteer group which provides walks for students, faculty and staff to and from campus between 10 p.m. and 2 a.m. Monday through Thursday — as a readily available preventative safety measure to keep Longhorns safe at night.

Currently, 5 to 10 people request SURE Walk every night, Patel said. He said he expects this number to grow next semester as SG recruits more volunteers from student organizations and the athletics department.

“Men need to understand the humanity of the situation,” Patel said, referring to the low attendance of males at the meeting. “When we’re in a position of privilege, we have to work extremely hard to support those who are not, or who are suffering because of our privilege.”