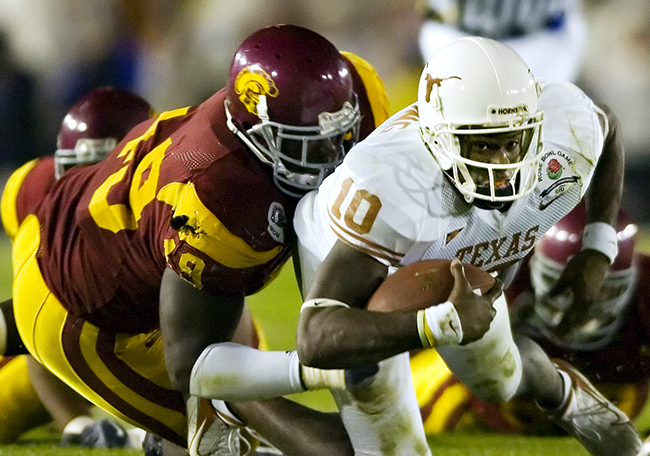 Editor’s Note: Treon wrote for The Daily Texan, was a member of the original Double Coverage staff and served as the Texan’s sports editor during the spring of 2008.

As the Texan crew and I walked into the Cotton Bowl to cover my final Red River game as a staffer (I was assistant sports editor at the time), I noticed an older fan reading Double Coverage. He wasn’t a student — perhaps he was in the Darrell Royal days — and yet he was reading what was then a fairly new publication.

As we approached the media entrance, I spotted fan after fan gobbling up the stats, rosters, features and insights the staff and I had put together. The game — especially at that time — was one of the biggest in college football. And a lot of fans were reading Double Coverage to get their final pregame analysis and information. Talk about exciting.

Turns out this tab wasn’t just for our enjoyment as sports writers — many of whom were also trying to get clips published for future job prospects. It wasn’t just to get more advertisers to pay for real estate next to Longhorn news. The public at large, away from campus, was using our information and knowledge to enhance their game-day experience.

Looking back at the evolution of Double Coverage, I am still impressed at the diversity of content we were able to present to our readers. My favorites were the features. You got a chance to highlight players, whether it was Colt McCoy or the second-string defensive lineman who works with Mothers Against Drunk Driving.

But in addition to those spectacular stories, we found a way to analyze the game that requires less attention, such as Keys to the Game and other short, insightful nuggets. It was a style that was almost foreign to me. Journalism classes taught story structure and AP style, not how to break down Texas’ run game in 20 words or less —what we now call tweeting. But as we developed the style, we realized how much more information we could get to the fans.

I am proud to have been one of the early contributors and influencers of Double Coverage. I’m also proud that it’s still around 10 years later.