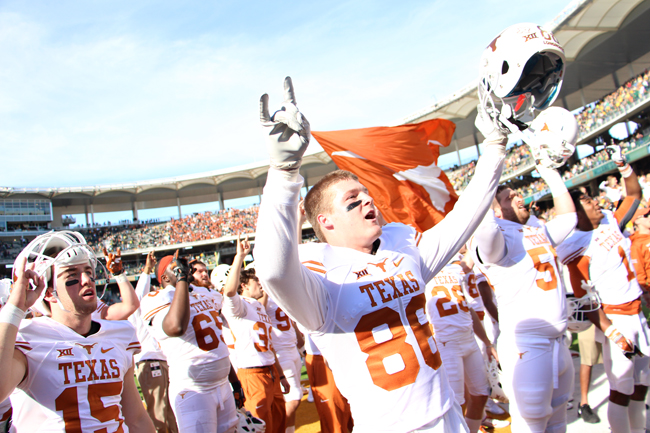 After forcing a Texas punt, the Bears used eight minutes to drive the ball 82 yards. However, the Bears’ drive stalled in the red zone and sophomore kicker Chris Callahan cut Texas’ lead to 20-10 with a field goal.

The Longhorns failed to convert a fourth down on their ensuing drive, giving the Bears the ball around midfield. Baylor answered with an 8-yard rushing touchdown from junior wide receiver Lynx Hawthorne to cap a nine-play, 61-yard drive.

With a chance to take the lead, Baylor fumbled on a fourth-down hit by sophomore defensive tackle Poona Ford. The Longhorns recovered and ran the clock down to 1:24 before punting back to the Bears.

Texas broke up back-to-back deep balls in the final 10 seconds to seal the 23-17 victory. The win marks the Longhorns' second win against a top-15 team this season.

After holding Baylor to a three-and-out, the Longhorns drove the ball 57 yards on seven plays to set up shop inside the Bears’ 10. However, the drive stalled, and Texas settled for a field goal and a 10-0 lead.

Texas continued to gain momentum when freshman safety P.J. Locke forced a fumble on Baylor's fourth drive. The Longhorns recovered and quickly scored another touchdown on a 9-yard run from Swoopes.

The Bears responded with an 11-play, 38-yard drive. However, Callahan missed his second field goal with seconds to play in the half.

The Longhorns face a Bears offense that ranks No. 1 in scoring and No. 1 in total yards. The high-powered unit will test Texas' struggling defense, which gives up 33 points per game on the road.
Texas will send out junior quarterback Tyrone Swoopes for his first start since the team's season-opening loss at Notre Dame. Swoopes leads the team in touchdowns this season with 11.

Texas hopes to avoid its first eight-loss season since 1956. With a win, the Longhorns can also garner some momentum heading into the offseason.