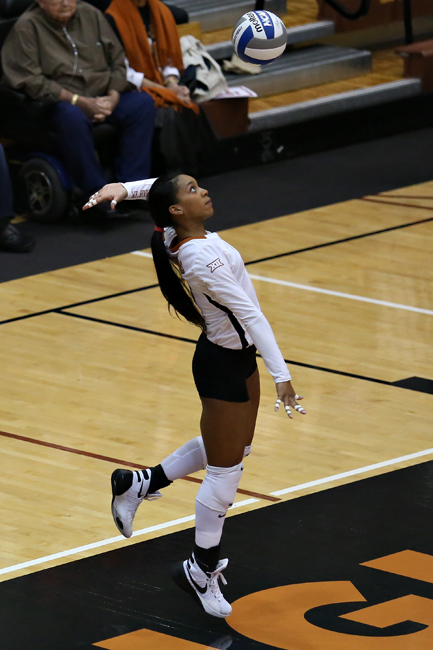 Tied at one set apiece and down 7-3 in the third, head coach Jerritt Elliott called a timeout and motioned his team over to the sideline. Elliott knew he had to stop the bleeding after a second set in which his team was decimated by an under-seeded Purdue squad.

“I just wanted to calm us down,” Elliott said. “We felt like we needed to calm them down and understand what we needed to do to control the pass tempo and set our approach patterns.”

Elliott’s conversation with his team worked. After breaking the huddle, Texas went on a 6-1 run to take the lead, 9-8. The Longhorns eventually downed the Boilermakers, 25-19, in the set and, 3-1, in the match.

Texas led for the entire opening frame, building an 11-7 lead before claiming the set, 25-14. Strong play from junior setter Chloe Collins highlighted the Longhorns’ victory, as she amassed 12 assists in the first set — more than the entire Purdue team.

But whatever momentum the Longhorns had coming back onto the court for set two was quickly quelled. Purdue took it to an out-of-sorts Texas squad in the second set, dominating throughout.

Strong defensive play from Purdue bothered a sloppy Texas squad, who ended the set with a rare negative kill percentage. Purdue went on a 12-3 run in the middle of the set, putting the Longhorns away, 25-14. The 14 points were the lowest registered in a set by Elliott’s team all year.

“They didn’t let off once,” McCage said. “A lot of times we sneak in when a team backs off a bit, but they were not willing to do that at all.”

Texas returned to form in the third set after Elliott’s timeout. Back-to-back blocks by senior outside hitter Amy Neal and freshman outside hitter Yazzi Bedart-Ghani spurred the Longhorns’ attack, tying the set at eight apiece after falling down, 7-3. Texas prevailed,  25-19, despite 10 ties and 11 lead changes.

The Boilermakers put up a fight in the match’s final frame with their backs against the wall. Purdue hung with Texas throughout, bringing the set to a 25-25 tie. The match looked primed to enter a decisive fifth set, but senior outside hitter Amy Neal came through in the clutch. The Big 12 Player of the Year rose to the occasion, registering two straight kills to secure the 27-25 victory.

The Longhorns advance to their 10th straight Sweet 16 with the victory. Elliott’s message was simple despite the sloppy play — survive and advance.

“I told them, ‘just find a way,’” Elliott said. “I want to spend another day with them. I’m really enjoying this group, and it’s one of the favorite teams that I’ve coached.”