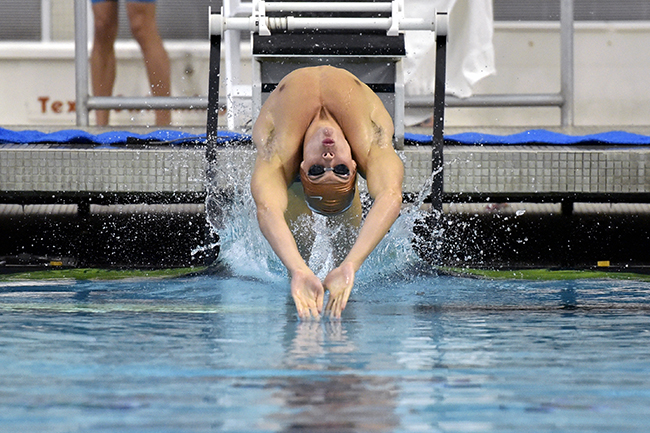 The decorated Texas swim program added two more swimmers to the record books on Day 4 of the Texas Invitational on Saturday.

“I’d be lying if I said I wasn’t thinking about getting the records,” Smith said.  “It’s definitely a big step from my freshman year, from when I didn’t make the [NCAA championships] to doing times that are pretty respectable. It’s a stepping stone to where I want to be.”

Texas posted a 1-2-3 finish in the 100-yard freestyle. Sophomore Brett Ringgold won with the No. 3 time in the country of 42.04. Senior John Murray and senior Matt Ellis took second and third places.

“I think what pushed [Ringgold] over the edge to swim as well as he did this week is he ended up getting an ‘A’ in a course when he thought he was going to get an ‘A-’,” men’s head coach Eddie Reese said. “It doesn’t take much to make him happy.”

Junior All-American Will Licon pulled ahead to build a commanding lead and win the 200-yard breaststroke with the No. 1 national time of 1:52.82.

Sophomore Joseph Schooling and junior All-American Jack Conger swam the No. 1 and 2 times in the nation for first and second place, respectively, in the 200-yard fly. Schooling distanced himself from the pack to clock a 1:40.48 with Conger behind him at 1:41.40. Junior Will Glass placed third in 1:43.91.

Freshman Joanna Evans started the evening for the No. 4 Longhorn women with a narrow second-place finish in the 1650-yard freestyle at 16:07.78.

“She’s never done [the mile], so the first time out of the gate… that’s a hell of a swim,” women’s head coach Carol Capitani said.

Junior Tasija Karosas broke the school record in the 200-yard backstroke with 1:50.49 — also good for the No. 4 time in the country. Her time was more than two seconds faster than the previous Texas record of 1:52.58. Freshman Quinn Carrozza placed second with 1:53.47.

“I trained to break at least a 1:52.5, but the fact I could shave off two seconds off a record, I couldn’t believe it,” Karosas said. “I looked up at the board, and thought the time was wrong, but it sunk in because I train for that every day.”

Sophomore Rebecca Millard placed third in the 100-yard freestyle with a 48.41 in a close race. USC junior Anika Apostalon won with a 48.21. In the 200-yard butterfly, freshman Remedy Rule clocked a 1:55.89 for third place.

The 400-yard freestyle relay teams wrapped up the evening with a third-place finish by the Texas women. The Longhorn men earned an NCAA cut with their winning time of 2:50.72.

Capitani said the Longhorns will now focus on training through winter break to stay conditioned for 2016 competition.

“We’re going to refocus on our goals as a team,” Capitani said. “Next thing you know it’s going to be time for the January dual meets, the conference meet in February, and then NCAAs in March. I just want to stay consistent. I want to keep everybody healthy and just keep everyone improving.”

The Texas divers take the platform at the USA Diving Winter nationals on Dec. 15. The swim teams return to action against Georgia on Jan. 7 in Austin.