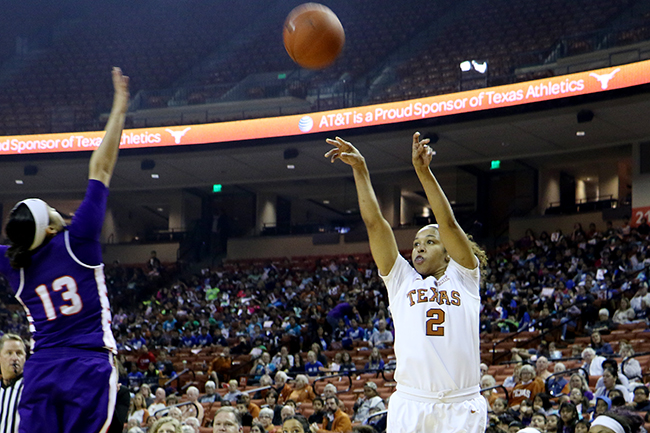 Texas faced a halftime deficit for the first time all season Sunday afternoon.

The No. 6 Longhorns trailed Little Rock 37-35 at the intermission on the road.

The third quarter was only worse for the Longhorns.. Texas failed to register a single point in the period as Little Rock built a 48-35 lead going into the final frame.

“Little Rock disrupted us for a long time,” head coach Karen Aston said. “We didn’t matchup with them very well, and we weren’t very connected defensively.”

But sophomore guard Brooke McCarty nailed a three, stole a pass and took the ball the other way for an easy score early in the fourth. She singlehandedly trimmed the Trojan lead to single digits, 48-40.

Senior center Imani Boyette drilled two free throws, a layup and a mid-range jumper on the Longhorns’ next three possessions to dwindle the deficit to 48-46.

McCarty tied the game with another layup, and Boyette claimed the first lead for the Longhorns since the seven-second mark of the first quarter with a jumper from the free-throw line.

Little Rock scored its first points of the fourth to tie the game at 50 with 4:16 remaining. McCarty hit another three to give Texas the lead again, and the Longhorns never looked back en route to a 66-56 victory.

McCarty led the comeback charge for the Longhorns, scoring 16 of her 23 points in the fourth quarter. Texas (7-0) outscored Little Rock, 31-8, in the final 10 minutes.

McCarty sank six free throws in the final forty seconds to seal the victory. Free-throw shooting surfaced as a point of emphasis for Texas after beating Mississippi State at home last week.

Texas shot 80 percent from the line (12 of 15) against Little Rock after making only 15 of 26 in a home win against Mississippi State last week. McCarty was a perfect 8 of 8 from the line.

The 31-point outburst in the fourth saved Texas’s undefeated start to the season. Aston, however, credited the defense for the Longhorns’ comeback.

“We dug ourselves a hole, but we got a couple of stops and it got our energy going,” Aston said. “We’ll grow from this.”

Texas gets the rest of the week off before returning home to face No. 16 Stanford on Sunday at 12 p.m.