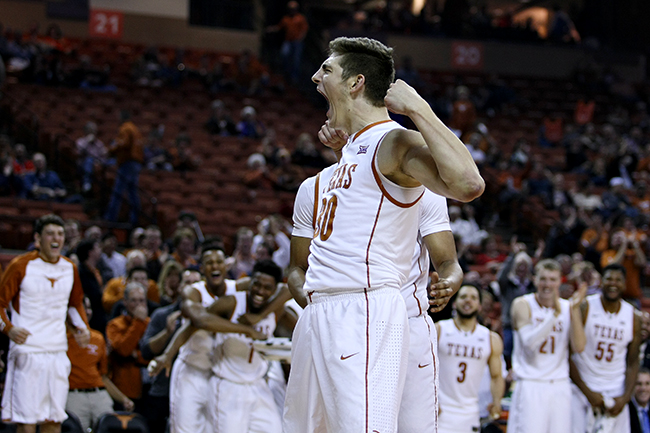 As he backed his man into the basket, the Frank Erwin Center crowd rose in anticipation — even though Texas carried a 98-37 lead with five minutes remaining in the game.

The walk-on forward turned and shot the ball over his defender and through the net. Surprising yells came from the otherwise quiet crowd. McClurg’s shot brought the Longhorns to 100 points on the game. He also tallied his first points of the season.

In total, the walk-ons scored 14 points. They walked off the Erwin Center floor as stars in a 116-50 win Tuesday night.

“It’s an amazing feeling,” freshman guard Tevin Mack said. “They work just as hard as we do every day in practice. They’re actually good players. They just don’t have a scholarship.”

The Longhorns got out to a fast start, giving fans another glimpse of Smart’s much-heralded defense. Texas forced four turnovers in the game’s opening minutes, converting them into a 10-0 lead.

Then the offense kicked in. Freshman guard Eric Davis Jr. drilled back-to-back 3-pointers. Not to be outdone, fellow freshman guard Tevin Mack hit another 3-pointer and made a layup. Mack ended the game with a career-high 17 points.

“It’s amazing that I made some shots tonight,” Mack said.

Texas went into the half with a 56-17 lead, just 3 points shy of its total in a full 40 minutes four days prior.

The Longhorns made clear early in the second half that they aimed to hit the century mark. Texas scored 10 points in the first four minutes of the half, including 8 points from senior center Cam Ridley. He finished the night with a team-high 19 points.

Ridley said the outside shots helped him get space beneath the basket.

“It they’re hitting shots, it’s more likely that I won’t get doubled,” Ridley said. “You just got to pick your poison.”

But then the walk-ons stole the show.

McClurg entered with 6:25 remaining in the game to rousing ovation after junior forward Shaquille Cleare fouled out. Just a few minutes later, McClurg hit his first shot of the season. He followed it up with another bucket from the other side of the hoop.

Newsome kept the crowd going after it had been dead for most of the game. He hit 3-pointers on two consecutive possessions en route to a 9-point performance in just four minutes of play.

Head coach Shaka Smart said it was great to see end-of-the-bench players shine after bringing such enthusiasm to the team.

“Those guys do a terrific job of coming in every day and being about the team and about their teammates,” Smart said. “They’re really unselfish guys.”

The competition for Texas, however, jumps significantly as No. 3 North Carolina takes the Frank Erwin court on Saturday at 4:15 p.m. The Longhorns pulled off an 86-83 victory in Chapel Hill in the last meeting between Texas and then-No. 13 North Carolina in 2013.

“Those are the types of games that as a player you get really, really fired up for,” Smart said. “As a coach, it’s a great chance to see as a team if we can take a big step.”