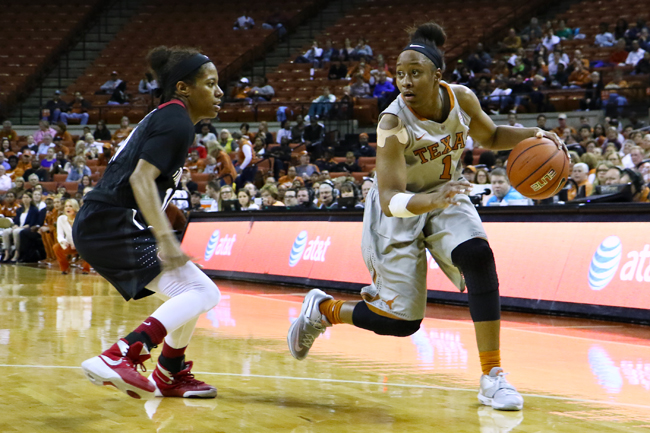 Less than 24 hours after the men’s basketball team’s buzzer beater against UNC and the volleyball team punched their ticket to the Final Four, the No. 5 Longhorn women’s basketball team continued the successful weekend, defeating No. 14 Stanford, 77-69, Sunday afternoon.

“I think we were scared to not play well after yesterday,” head coach Karen Aston said. “It’s a great weekend to be a Longhorn, don’t you think?”

Senior Empress Davenport had the hot hand, leading all scorers with a career-high 23 points. At the end of the first quarter, Davenport had eight points on 4-of-7 shooting. She opened the second quarter with a 3-pointer and followed that with a steal and layup the following play, extending the Texas (8-0) lead to 11.

“I just don’t think we showed grit against her,” VanDerveer said. “She got it going, and we really didn’t have anyone step up and put a stop to it.”

The three guards combined for 46 of Texas’ 77 points. Aston said solid guard play made the difference down the stretch.

“I think our guards have a confidence about them that I haven’t seen since I’ve been here,” Aston said. “I think their steadiness throughout the game was the really the difference in the game.”

McCarty said the guards have more confidence than they did last year.

“We weren’t really scorers,” McCarty said. “We were just trying to get the open person the ball and give it to other people to shoot. But this year, we know that they just can’t only guard our posts. We have great, offensive guards.”

The win marked the Longhorns’ third victory over a ranked opponent this season. Aston said these quality wins will be important for both conference play and potentially post-conference play.

“They are helping us but I think more in a sense of just preparing us for Big 12 play,” Aston said. “All of this is just the ability to look back and think from it when you have tough times in postseason play or in Big 12 play.”