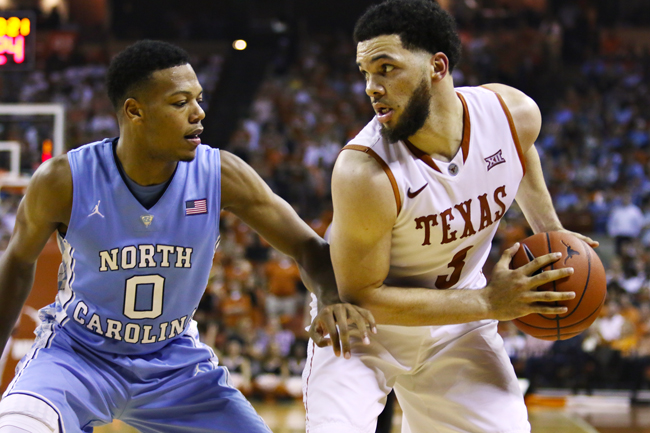 Shaka Smart and the Longhorns have a reason to be happy. The head coach and his squad have won four straight games and are coming off an 84-82, buzzer-beating win over North Carolina.

But Smart wants to put it in the past, and avoid a letdown in Texas’ next contest against the Appalachian State Mountaineers on Tuesday at the Frank Erwin Center.

“People always talk about responding to adversity, but I think responding to any type of success or something good that happens is just as important,” Smart said.

The win against the then-No. 3 Tar Heels came in front of a sold out Erwin Center crowd and a national ESPN audience. The Mountaineers are a 2-6 Sun Belt Cconference team, but freshman guard Eric Davis, Jr. said Texas has to take Tuesday as seriously as last Saturday.

“That was the emphasis this week,” Davis said. “We can’t have that type of energy not just for North Carolina, but now we have to move on to Appalachian State. We need to match that intensity and even bring it up more.”

Tuesday’s game also culminates a five-game homestand for the Longhorns, and Texas can clinch a perfect 5-0 record with a win. The extended stay at home came at a good time for Texas — the Longhorns were 2-3 on Dec. 1 and played four of their games on foreign soil.

“We needed to get back on a routine in terms of being student athletes — class, practice, our guys sleeping in their own beds,” Smart said. “With China and the Bahamas, the results that we had weren’t what we wanted them to be, and sometimes that can get you down a little bit as a player.”

The travel was disadvantageous since Texas was in the process of installing a new coaching staff and system. The homestand and the highlight-win against North Carolina helped show what the team could become.

“It’s just a matter of coming out there and putting it together to be one of those really good teams on a consistent basis,” senior guard Javan Felix said. “We weren’t able to do that early in the season, and I think we’re getting better at it but we’re still not where we want to be yet.”

The Longhorns celebrated Saturday’s win, but Smart said there’s still plenty they need to work on starting on Tuesday against the Mountaineers.

“There was still a lot of things we need to do to be better as a team,” Smart said. “It was a great win for our guys and our program on a lot of levels, but at the same time, we’ve got to grow. We’ve got to improve.”