Texas rolls over Canisius to improve to 9-0 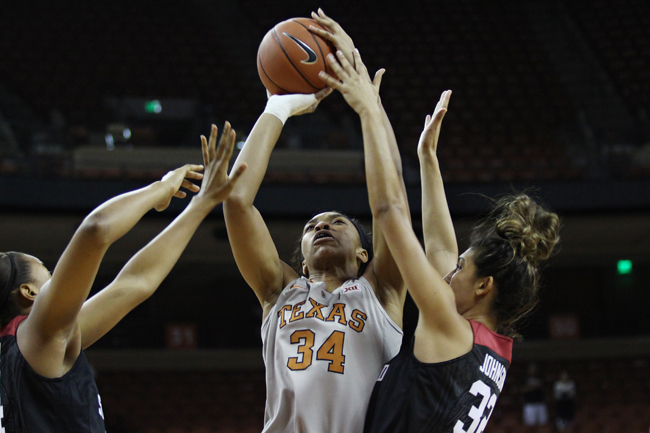 No. 5 Texas had few issues earning its 990th win in school history with a 92-62 victory over Canisius — but it didn’t start that way.

“I just didn’t think our attention to detail was very good from the start of the game,” Aston said. “Also I will say, that the five that went in the game had a couple of good practices after the Stanford game and earned some playing time. “

Despite the slow start, Texas closed out the first quarter on a 7-0 run and opened the second with six unanswered points. After a couple of threes from senior Celina Rodrigo and sophomore Brooke McCarty, Texas led 47-30 at halftime.

Texas continued its hot shooting in the second half, forcing Canisius head coach Terry Zeh to switch defensive schemes. They started in a zone, hoping to contain senior Imani Boyette and force Texas to make shots, but eventually went to man-to-man.

“Our hope was that they didn’t make threes tonight,” Zeh said.

That wasn’t the case. Texas shot 8-of-17 from beyond the arc and maintained a double-digit lead throughout the second half.

“I just felt like if we were going to try and make a dent in it, the way they were making threes against it, we had to do something different,” Zeh said. “We hovered around that 14-17 mark too long; we couldn’t get it down to 10,11,12.”

Boyette, who finished with 15 points and 10 rebounds, said good outside shooting opens up things inside.

In addition to shooting well beyond the arc, Texas outscored Canisius 44-22 in the paint. With Canisius’ tallest player being 6-foot-1, Texas fed the ball to 6-foot-7 Boyette and 6-foot-5 Lang often. But even with the height advantage, Aston said they have to work on lobbing passes and how to receive lobbed passes.

“We just have to clean it up because possessions will become extremely important really quickly,” Aston said.