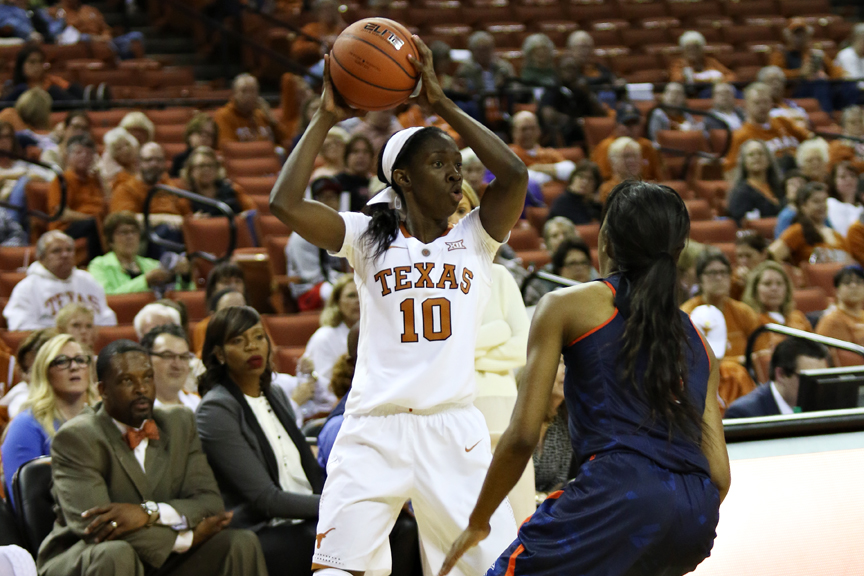 The No. 5 Longhorns picked up where they left off before the holiday break Sunday, beating Sam Houston State 83-49 at the Frank Erwin Center.

Freshman guard Lashann Higgs flirted with a triple-double, finishing with 17 points, eight rebounds and eight assists in addition to a team-high four steals. Lead by Higgs, the Longhorn bench had 62 of the team’s 83 points.

But Texas (11-0) got off to a shaky start offensively. The Longhorns missed 12 of their first 13 shots, prompting head coach Karen Aston to turn to the bench.

“It’s huge when you know you have production that will come off the bench,” Aston said. “We have players that give us a lift from an energy perspective.”

Leading only 4-2 midway through the first quarter, sophomore guard Ariel Atkins secured a rebound and flipped the ball up and in  — the beginning of a 13-0 Texas run.

Later in the quarter, Higgs snagged a defensive rebound and took it to the other end of the floor. She lofted the ball over the top of a Bearkat defender to junior center Kelsey Lang, who then scored.

Higgs and Lang continued to feed each other for easy buckets early in the second. Lang stole a Bearkat pass and flicked it to Higgs who finished at the other end. Next time down the floor, Higgs found Lang in the paint for two.

Higgs then took over, stealing a pass and taking it coast-to-coast to extend Texas’ lead to 26-12. Texas later took a 36-17 lead into the locker room at halftime.

Higgs continued making an impact after the break as she and sophomore guard Brooke McCarty assisted each other on back-to-back possessions. Higgs then once again did it on her own, taking a steal to the rim for two more and a 69-37 Texas lead.

Higgs said that patience is the biggest reason for her efficient night on both ends of the floor.

“As a freshman, every game is a learning process,” Higgs said. “I would say what I have to work on each and every game is slowing down and looking at every option and not just going and going all of the time.”

McCarty led the starters in scoring with 7 points on 3-of-4 shooting, but it was a game that truly belonged to the bench. Higgs was one of four players to score double-digits off the bench.

Despite the win, the Longhorns failed to make a 3-point shot for the first time since March 6, 2007. While the players shot 0-of-10 from three, they managed to make 61.5 percent of their two-point attempts.

The win gives Texas back-to-back 11-0 starts in nonconference records for the first time in school history. Next, the Longhorns start Big 12 conference play against West Virginia on Wednesday. Aston says the team has a different mindset this year.

“Last year, we were a little bit too proud of what our record was and a couple of the wins against ranked teams,” Aston said. “We didn’t know how to approach league play. I think we do now.”