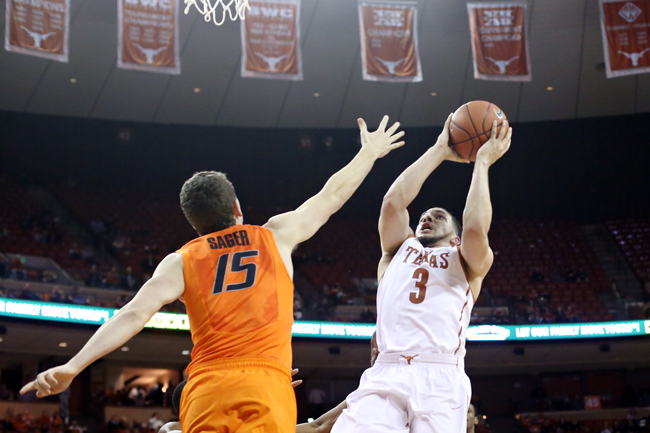 After trailing for the entire second half, the Longhorns came out of a timeout trailing 48-46 with 4:48 remaining in the game and needing a basket to gain momentum.

Javan Felix turned out to be their man.

With the shot clock winding down, the senior guard drilled a jump shot from the right elbow to tie the game. The next time down the court, he stepped up and hit a 3-pointer to give Texas a 51-50 lead — its first since late in the first half.

The quick five points was all the Longhorns needed to switch the momentum. Texas never trailed the rest of the way en route to a 60-57 win over Kansas State on Tuesday night.

The Longhorns initially came out with a much-improved effort compared to how they played in the loss to Texas Tech on Saturday. Felix hit an early 3-pointer, and senior center Prince Ibeh contributed with a dunk to give them a 7-0 lead.

Texas eventually built a 24-17 lead, holding Kansas State to just six successful shots, but then the tables turned. Junior guard Isaiah Taylor picked up his third foul with 3:54 left to go in the half, and the Wildcats took full advantage.

Kansas State closed the half on a 12-2 run behind five forced turnovers to take a 29-26 lead into the break.

Both teams came out evenly matched in the second half, with the Wildcats maintaining a three-point lead most of the way.

But down by four with six minutes left, the Longhorns went on their run. Taylor immediately answered with a layup, and then Felix took over with seven-straight points for Texas to take a 53-50 lead. Taylor hit 4-of-6 free throws to seal the win.

Taylor said the difference late in the game was just getting stops.

“We put an emphasis on finishing plays,” Taylor said. “When they throw up a bad shot, we have to get the rebound and go out and run. I think we did that on the last few possessions.”

Felix finished the game with 14 points despite shooting 4-of-11 from the field. Taylor led the Longhorns with 17 points and four assists.

Texas also saw much better production from its big men after getting just three points and 13 rebounds from the centers on Saturday. Ibeh and junior forward Shaquille Cleare combined for 11 points and 12 rebounds in the win.

The win give Texas its first Big 12 win of the season and travel to Fort Worth to face TCU on Saturday night.

Head coach Shaka Smart said the Longhorns' goal going into that game is to continue their “do your job” mantra they started this week.

“We just have to get better at doing our job, whatever the moment requires of us,” Smart said.