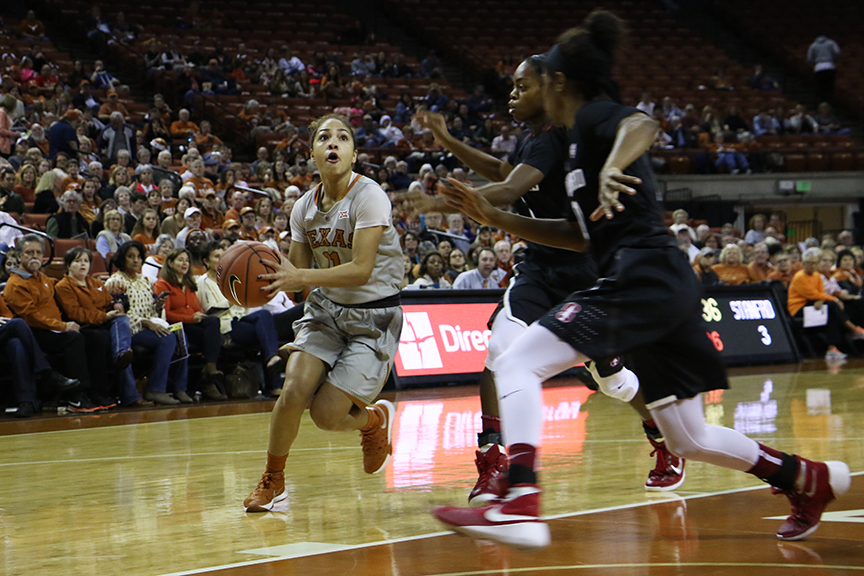 No. 4 Texas entered its 14th game of the season in the same fashion it did last year — undefeated and facing Iowa State.

But unlike last year, the Longhorns will prepare for their 15th game with an unblemished record running away from the Cyclones with a 75-54 victory on Wednesday night.

“I thought our team, once again, really got off to a great start,” head coach Karen Aston said. “I love our energy right now defensively. We seem very focused.”

McCarty scored nine of her 17 in the first quarter after hitting 3-of-4 from three-point range. She finished the contest 5-of-7 from deep.

Texas (14-0, 3-0 Big 12) held a slim 9-6 lead midway through the first quarter before sophomore guard Ariel Atkins drilled a three off the bench to double the Longhorn lead.

Senior guard Celina Rodrigo followed suit on the Longhorns’ next possession, and McCarty made it three straight with a triple of her own as Texas opened up an 18-6 advantage.

“Everybody was just relaxed,” McCarty said. “They came out there and took the open shots that they had. We kind of just got in a rhythm. We were comfortable.”

Points were harder to come by in the second quarter. The Cyclones (10-4, 2-1 Big 12) held Texas scoreless for nearly four minutes at the beginning of the frame.

Junior center Kelsey Lang responded to the restless crowd by sinking a midrange jumper, and Rodrigo nailed a three to give Texas another double-digit lead, 28-18.

While the offense came in spurts, head coach Karen Aston said that she was pleased with the defensive intensity.

“Right now, [with] the way that they’re playing together, you can allow them to make some mistakes,” Aston said. “They’re so in tune to helping each other.”

Specifically, Aston said that Boyette strayed away from her position too often to try to block shots. The result was a season-high seven blocked shots for the senior.

“One thing I always want to control is how I rebound and play defense,” Boyette said. “I didn’t really know I had that many blocks or rebounds. I was just trying to be in the right place and do what my team needed me to do.”

The Longhorns are off to their best start since 1986. That season, the team went 34-0 and won the first and only national championship in program history.

This season’s Longhorns pursue history of their own. Texas heads up I-35 to Stillwater to battle Oklahoma State (12-2, 2-1 Big 12) on Saturday.