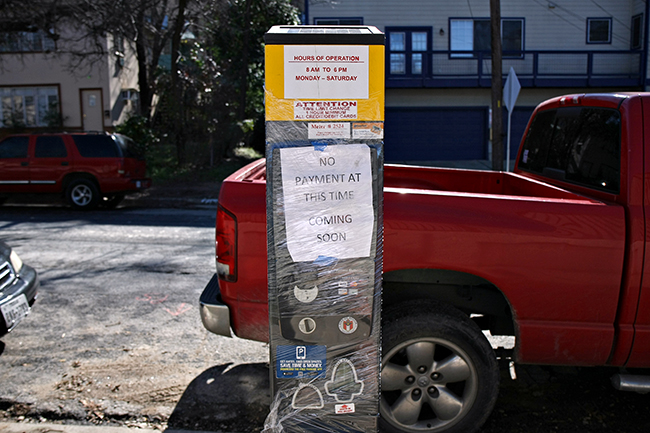 Newly installed parking meters in West Campus will start collecting money Wednesday as part of an expansion of the parking benefit district that was started in 2013.

The expansion of the benefit district was approved on Dec. 10 at an Austin City Council meeting. The University Area Partners neighborhood group requested the additional meters to help increase funds for improving pedestrian walkways throughout West Campus.

Not all of the funds comes from the parking benefit district, UAP president Cathy Norman said. The funds raised from the meters help fill in the gaps from other funding sources to provide sidewalks that are in compliance with the standards set forth by the Americans with Disabilities Act.

“It’s really important to provide that ADA- accessible or ‘any-human-being-accessible’ [quality so] that students aren’t going to trip over [the sidewalk], and that there is even a sidewalk there,” Norman said. “And the comfort that is provided by trees and the safety provided by lightning — we think that’s very important.”

The new meters are located in an area of West Campus that is closer to Lamar Street, enclosed by Martin Luther King Jr Boulevard, Rio Grande Street, 28th Street and Longview Street.

The meters were installed over the break but will remain wrapped in plastic until Wednesday.

Before the City Council approved the funding for the expansion, UT students were surveyed by Student Government’s city relations agency to get their thoughts on the expansion.

“Most of the results of the students who responded were pretty indifferent [regarding] whether or not parking meters were put up,” Nina Lemieux, biology and Plan II junior and Student Government city relations co-director, said.

Lemieux said she thinks there won’t be a backlash from students and that the future projects from the meter profits would be good for students living in West Campus.

“I think the majority of people who live in West Campus have options for apartment parking,” Lemieux said. “The goal of the parking meters is to charge people who don’t live in West Campus. It’s not like UAP is out to get students. What they’re going to do with the money is re-do the sidewalks.”

While Vu does not use street parking often, she said she has seen the need for sidewalk repair.

“I think overall most of the sidewalks aren't in the best condition [they] can be in,” Vu said. “Some are cracked — which isn't that bad since it isn't too noticeable — but then there are other sidewalks which are uneven, which can be kind of troublesome since I tend to hit my feet against [them].”

Daily commutes to campus for students who live farther away in areas such as Riverside and North Campus could become more costly. Education senior Anjelica Apolinar said finding parking is a frustrating process, and the frustration is only increasing as access to free parking decreases.

“It deters me from going on campus and doing more things,” Apolinar said. “I kind of only want to go to campus if I need to go to campus. I think it only gets harder for me because I am a college student, and I don’t have a lot of money to pay for parking.”

A newly installed parking meter is wrapped in plastic wrap, which has been further marked by an unknown subject with the word "ever." Daulton Venglar | Daily Texan Staff

Norman said the UAP plans on developing and working on sidewalks on 25th Street and making them similar to those that were updated previously on Rio Grande Street.

Out of the money collected from the benefit district parking meters, 51 percent of the profits, after expenses are taken out, go to the sidewalk improvement funding.

During the last fiscal year, Norman said the existing meters raised more than $136,000. With the installation of the new meters, Norman said the UAP is expecting approximately $100,000 in the next year.

“We do pretty much expect that the expanded parking will be similarly heavily parked,” Norman said.