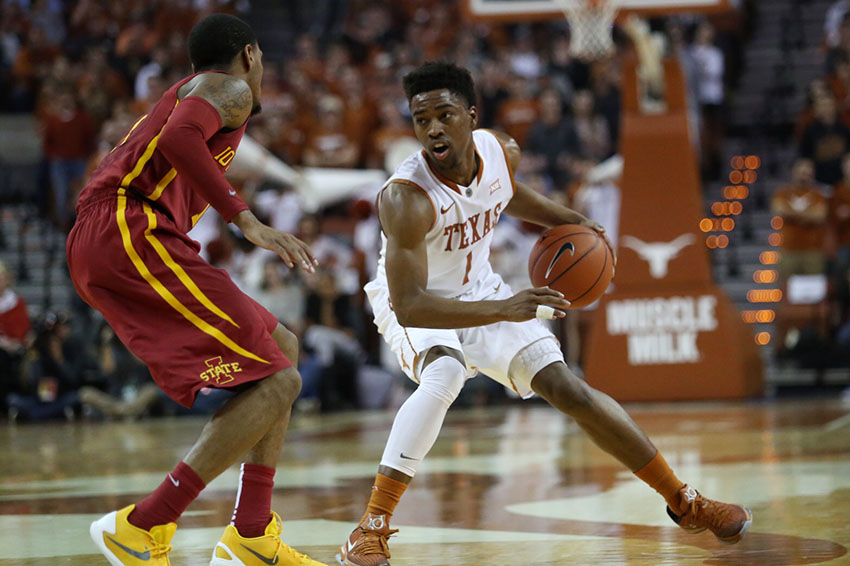 The Longhorns had led by as many as 23 points 15 minutes prior, but cold shooting allowed Oklahoma State to get back to within 20. Then 15. Then 10. And now, three.

But Taylor hit the first of four free throws he would take in the waning seconds to seal a 74-69 win for the Longhorns on Saturday.

“We got stops when we needed to, but it’s something we’ve got to learn from because if we do that on the road, it might be a different story,” senior forward Connor Lammert said. “We were fortunate to get this one tonight.”

Just days after knocking down 13 3-pointers, Texas began the game missing each of its first five 3-pointers and scoring just two points in the first four minutes against the Cowboys.

But the funk wouldn’t last for long.

Lammert hit a 3-pointer, followed by one apiece from Taylor and freshman guard Tevin Mack. Within a four-minute span, the Longhorns turned a 4-2 deficit into a 15-6 lead.

Meanwhile, the Longhorns defense remained steady throughout the half, holding the Cowboys to 34.6 percent shooting from the floor and just 25 percent from the behind the arc. Evans, who came in as the Cowboys’ leading scorer, scored just five points.

Texas finished off the half with a 19-11 run behind 46.4 percent shooting from the field and 5-of-15 shooting from behind the arc.

“We just banded together,” Taylor said. “We got a couple of stops on the defensive end. We translated that into offense.”

But as quickly as is it all came together for Texas, it nearly fell apart at the end.

After taking a 23-point lead with 15 minutes to go, the Longhorns couldn’t get anything to fall. Possession after possession, Texas came down the court, missed a 3-pointer and then fell back to play defense.

Meanwhile, the Cowboys used the opportunity to find a way back into the game. Oklahoma State hit five 3-pointers and shot 39.5 percent as the deficit began to dwindle.

“We hit a little bit of a low where we weren’t guarding with the same tenacity and energy,” Smart said. “Then [the Cowboys] went zone on us, and we got a little stagnant on offense.”

But time turned out to be on the Longhorns’ side. Texas forced just enough missed shots and hit 8-of-10 free throws down the stretch to game onto the win.

Taylor said they “didn’t drop their heads” as the Cowboys closed the gap.

“Coach told us to stay engaged and stay poised as a team,” Taylor said.

The schedule only gets harder for the Longhorns. Texas heads on the road to face West Virginia on Wednesday and Kansas on Saturday, where the team is just 1-5 over the last three seasons.

The Longhorns have struggled in true road games this season, going 1-2 away from the Frank Erwin Center, but Taylor said he’s excited for these games away from Austin.

“Those are fun places to play,” Taylor said. “Playing on the road is fun. There’s excitement on the road. Everyone’s against you. All you have is your team.”