Hoverboard use not allowed in residence halls, according to DHFS 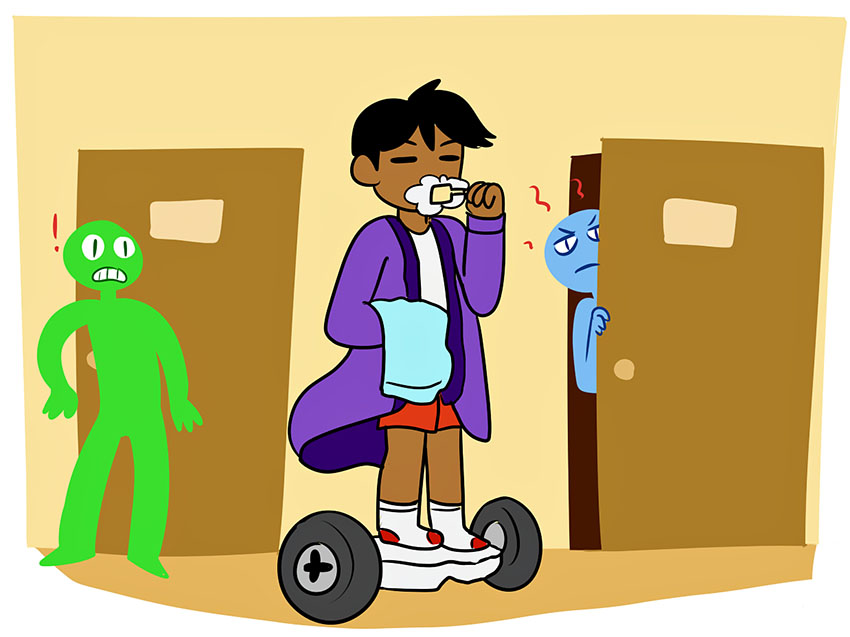 The Division of Housing and Food Service has prohibited the use of hoverboards in residence halls and dining facilities, according to director of residence life Mylon Kirksy.

The 2015-2016 DHFS Residence Hall Manual bans students from playing sports in residence halls, “[including], but not limited to, playing Frisbee, rollerblading, skateboarding, tossing balls … and/or riding bicycles
or hoverboards.”

DHFS decided to implement restrictions on hoverboards, a type of electric skateboard with wheels, after researching general safety concerns and noticing the limitations other universities put on the devices, Kirksy said. While there is not an official hoverboard ban on the UT campus, more than 30 U.S. universities have decided to ban hoverboards on their campuses because of safety concerns, according to an Associated Press article written Jan. 7.

DHFS sent an email to students on Jan. 7 regarding the use of hoverboards in residence halls that contained a link to the updated version of the residence hall manual.

“The residence hall is a place where there are hundreds of students, and there’s a lot of traffic,” Kirksy said. “We want to just be thoughtful about whether or not people can really be safe
riding hoverboards.”

Despite the prohibition on hoverboard use in students’ dormitories, students are still able to store the devices in dorm rooms or charge them in resident hall areas.

James Johnson, fire marshal for Fire Prevention Services, collaborated with DHFS regarding appropriate restrictions on hoverboards because of recent reports of fire safety issues. The National Association of State Fire Marshals has investigated some reports of hoverboards spontaneously igniting because of their lithium ion batteries. He said there is currently no discussion of a University-wide
policy restricting hoverboard use throughout the entire campus.

“Certainly, as additional information becomes available, the practices and policies of the University are subject to change, and they’ll be updated accordingly,” Johnson said. “At some point, there may be a University-wide committee that talks about prohibition [of hoverboards] on campus, but currently they would probably fall into a skateboard category, so you can ride them where you can ride skateboards.”

Johnson said the limited availability of data on hoverboards, because of their novelty in the market, prevents the University from having an accurate idea about the devices’ safety. According to Johnson, no incidents involving hoverboard malfunctions on campus have been reported.

Mechanical engineering junior John Peng said he thinks hoverboard use should be limited on campus because of possible safety issues, including the danger of new hoverboard users running into other students
on campus.

“I don’t think hoverboards are particularly safe for widespread use on campus because of the potential fire hazards they hold if not charged properly,” Peng said in an email. “Additionally, they may present a cause for physical hazards.”

The Consumer Product Safety Commission is currently reviewing the risks to personal and property safety from hoverboard use.

“There’s not an absolute interpretation that hoverboards at large are unsafe,” Kirksy said. “We’re not looking to overly restrict our students but just to make sure that they remain safe.”