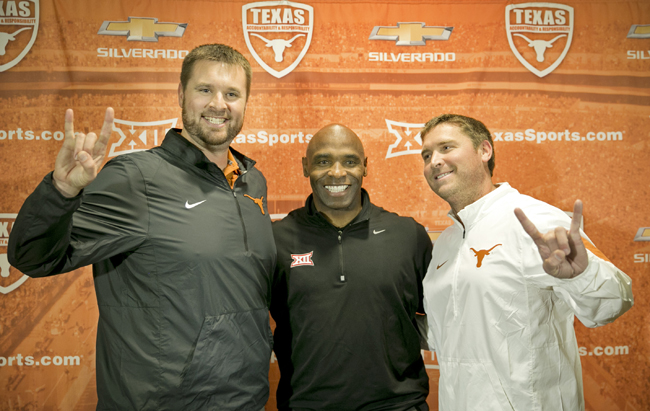 Texas students have, until today, been freed from the bonds of schoolwork for almost a month. Texas athletics, however, continued to make headlines while the rest of the student body was catching up on sleep. Here’s what you might have missed during the past six weeks.

While everyone else was frantically scrambling for last-minute gifts, Texas volleyball was busy reasserting its position as the most successful Longhorn sports program in recent history.

Texas rode a seven-game winning streak to finish the regular season ranked No. 3 in the country and cruised into the finals of the NCAA Championship tournament against Nebraska.

But 11-kill efforts from All-American junior Paulina Prieto Cerame and freshman Yaasmeen Bedart-Ghani were not enough to bring home a championship. Texas fell 3-0 to the No. 4 Cornhuskers and will have to wait another year to light up the tower with a No. 1.

On the hardwood at the Erwin Center, the Texas men’s basketball team upset then-No. 3 North Carolina thanks to a split-second buzzer beater by senior guard Javan Felix, and then came back to pull out a three-point win over then-No. 17 Iowa State.

But the Longhorns’ success was stymied by the loss of senior center Cameron Ridley, who broke his foot in practice in late December. That, along with road losses to Texas Tech and TCU, have put a damper on the otherwise successful winter break for new head coach Shaka Smart and his Longhorns.

The top-ranked men’s swimmers had argubly the most successful break.

All-American junior Jack Conger turned in a winning performance in the 200-yard butterfly, an event in which he holds the American record, to help propel the Longhorns over No. 8 Auburn, while freshman Townley Hass’ two wins in the 500 and 200 freestyle helped Texas edge the No. 3 Bulldogs and set its sights upon repeating as national champions.

Arguably the biggest change of the break though, came from a team that played just once in December. Texas football has seen a bit of a coaching shakeup since it failed to qualify for a bowl game.

Strong named Tulsa offensive coordinator Sterlin Gilbert, who honed his craft under Baylor coach Art Briles, as Watson’s replacement, but it remains to be seen whether new coaching rather than new quarterbacks is the solution Texas football needs to match the elite success of the rest of the Longhorn athletic program.