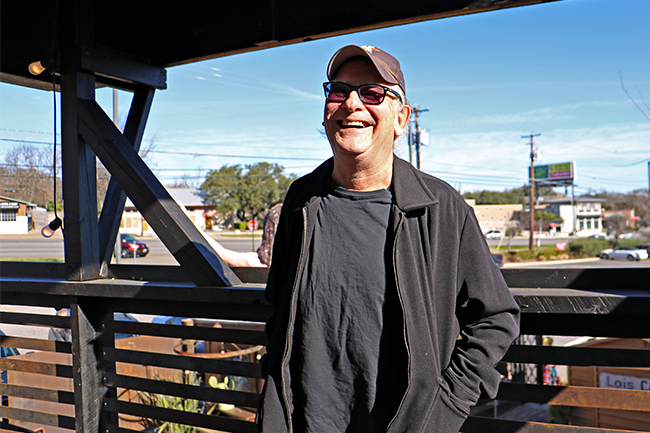 When Kerry Fitzgerald moved to Austin in 1970, he was a UT freshman looking to make concert posters. When he left 40 years later, he was Kerry Awn — cartoonist, muralist, band member, comedian and acclaimed poster artist. Awn adopted his pseudonym while drawing political cartoons for The Daily Texan during the Watergate scandal. After dropping out of UT, Awn said the name just stuck. “It was like I was a different guy,” Awn said. “Kerry Fitzgerald was an outstanding citizen, but Kerry Awn was a crazy, wild man.”

Many know Awn from the “Austintatious” mural he helped paint in 1974 on the side of the University Co-op. But before moving to Spicewood in 2010, Awn sat at the forefront of multiple cultural movements in Austin.

In the 1970s, Awn said he found himself creating concert posters for iconic music venues Armadillo World Headquarters and the lesser-known local favorite, Soap Creek Saloon. During these years, musicians such as a young Stevie Ray Vaughn, The Fabulous Thunderbirds and Jerry Jeff Walker passed through before they launched into fame.

Many of Awn’s posters hang in the South Austin Popular Culture Center, a nonprofit that collects Austin music-related art and ephemera. The center’s director, UT alumna Leea Mechling, said Awn is part of a group of poster artists who worked for Armadillo World Headquarters in the 1970s called the Armadillo Art Squad. “They influenced everything,” Mechling said. “[The squad] was a core group of guys who, in conjunction with the musicians whose art they were supporting, really changed the cultural landscape of Austin.”

Soap Creek Saloon became a frequent hangout for Awn, who helped found the Uranium Savages, a musical-comedy group that became the saloon’s informal house band. The Savages, who still perform today, are known for their theatricality — with wacky costumes, themed sets and a recurring Elvis character played by Awn.  “Writing songs is just another creative outlet,” Awn said. “It’s like doing a painting. You have an idea, and you go through with it, and then you have a finished product. To me it’s all the same — painting and being in a band and comedy — you are just creating.”

Awn’s comedy career got off to a slow start, telling a few jokes between songs while he was on stage with the Savages. So when Austin opened its first comedy venue in the 1980s, Awn said he jumped at the opportunity
to perform. After a couple of years doing stand-up, Awn caught the attention of Esther’s Follies, a vaudeville theater on Sixth Street where he would work, eventually full-time, for the next 30 years. Rather than perform traditional stand-up at Esther’s, Awn did impersonations — acting out well known figures such as George W. Bush and original characters such as sleazy Vegas comedian Ronnie Velveeta, the namesake of comedy club The
Velveeta Room.

“I would do [a set at] Esther’s, and then I would run down the street and [perform] The Velveeta Room on the same night,” Awn said. “I didn’t like just sitting around. If I’m going to be down there, I want to be doing something and not just sitting backstage waiting to go on.”

Awn left Esther’s Follies in 2011 and began focusing on art, his first love. He still performs periodically and was recently featured on a new comedy version of the Austin City Limits television show “Stand-Up Empire.” The show’s creator Brently Heilbron, a fellow comedian, was introduced to Awn’s bombastic Texas humor in 1999 and said he is both impressed and inspired by Awn’s lengthy career.

“To me, he represents everything great about the arts in Texas,” Heilbron said. “He is an artist, a comedian and a musician and was around at the inception of all those things. There isn’t a Texas Hall of Fame, but if there were, he would be inducted day one.”