Moody Bridge to be accessible Feb. 26 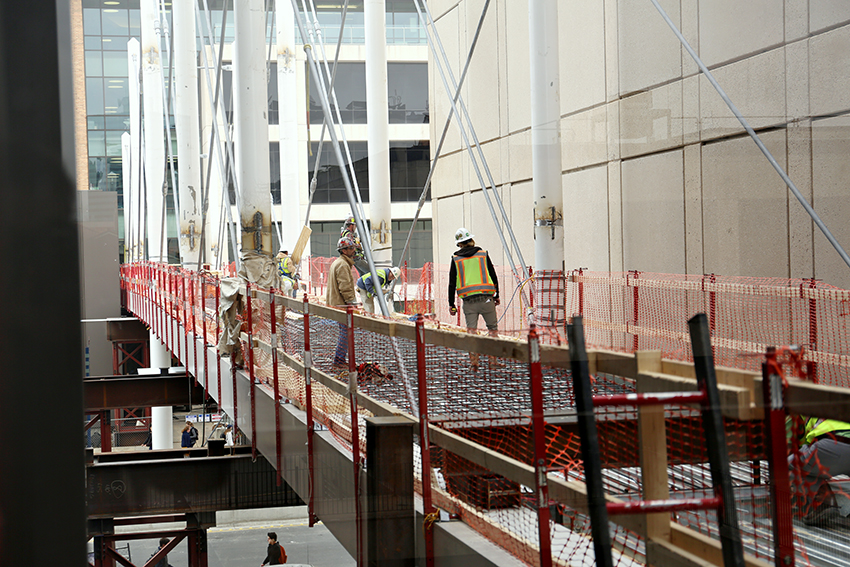 The Moody Bridge will soon be complete after months of construction come to a close.

Laurie Lentz, communications manager for University operations, said the 10-foot wide and 300-foot long bridge connecting the Belo Center for New Media and the Jesse H. Jones Communication Center is expected to be finished on Feb. 26. While construction initially began during the summer of 2015, Lentz said construction on the actual bridge started Dec. 21.

“Quite a bit of the work was done during the break on purpose to have as little impact on the campus as possible during the construction,” Lentz said.

Although construction workers already installed two spans over winter break and have completed a large portion of the bridge, construction will still impact Dean Keaton Street through the next month.

According to an email from Parking and Transportation Services, the westbound lanes will be closed from Jan. 22–23 for concrete pouring, which will detour traffic for those en route to Guadalupe Street.

After these lanes reopen, the eastbound lanes will close from Jan. 25–26 for concrete pouring, which will detour traffic en route to Dean Keeton Street. This detour will also affect the Communication Center Building A (CMA) parking garage.

Traffic will be delayed during these times, and another set of detours will occur in early February, according to the email.

“The goal was to have at least one side of Dean Keeton open at all times, moving back and forth between closures on the west side and closures on the east side,” Lentz said.

Radio-television-film junior Promise Jones said she is looking forward to having easier access between the two communication buildings when the bridge opens.

“I think it’s great that we can walk right from BMC to CMA,” Jones said. “Especially if you have a lot of communications classes between these buildings.”

The bridge, composed of concrete and steel, will also implement several safety features including lighting, guardrails and wheelchair accessibility. While bad weather could potentially delay the bridge’s opening, Lentz said the project is still on track to open on time.

Public relations sophomore Lily Allen said she is looking forward to using the bridge because she thinks it will alleviate waiting for an extended amount of time to cross the street between the two communications buildings.

“If you have a class further away, which I tend to have a lot of, waiting for the lights can really screw you up sometimes,” Allen said. “So [the Moody Bridge] is another traffic pattern you can kind of avoid lights on.”