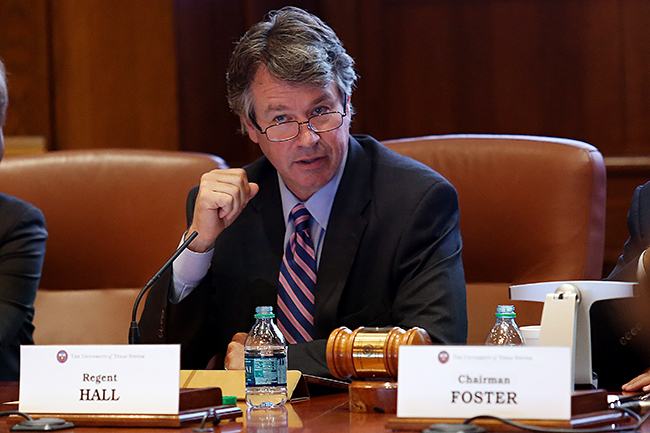 UT System Regent Wallace Hall filed an appeal Thursday afternoon against Chancellor William McRaven in an attempt to access to confidential student records in the Texas 3rd Court of Appeals.

The appeal came after a judge dismissed the case in December. A February report, commissioned by the UT System, found that found several dozen under-qualified students may have been improperly admitted to UT System schools through admissions connections. Hall then requested to access unredacted student records, which contain applicants’ personal information, from the System. McRaven said Hall could access redacted versions of those records for privacy reasons, but Hall said the redacted records are useless without identifying information.

In a statement Thursday, System officials said they had expected Hall to appeal the dismissal.

“We were anticipating the appeal,” a System spokesperson said. “Last week, Regent Hall’s attorney filed a motion for expedited consideration of his appeal, which Chancellor McRaven did not oppose.”

After the lawsuit was filed, the Board of Regents approved an admissions policy in August to curtail the number of under-qualified applicants to UT System institutions by requiring presidents of each institution to personally approve each admission case under a limited set of guidelines. However, Hall has continued to pursue the case, attempting to access documents that Kroll, a corporate investigations firm, used to create the report, according to the Texas Tribune.

When the lawsuit was first filed in June, McRaven said in a statement that a regent’s actions are not above the law.

“Where federal or state law makes confidential information that relates to a specific individual, whether it is private health information or an individual student’s protected information, it is our duty to ensure that we strictly comply with those confidentiality requirements,” said Chancellor McRaven in a statement. “I regret that Regent Hall believes the lawsuit is necessary or appropriate, but I am confident that my actions are in compliance not only with what the law requires, but also with what is in the best interest of our students, patients, and employees across the UT System.”

Hall’s lawyer, Joseph Knight, said Hall would be filing an appeal in December after the judge dismissed the case.

“Both sides recognized, as did the judge, that the final word in this case would come from an appellate court,” Knight said to The Dallas Morning News. “This is just step one.”