McRaven apologizes for lack of communication about UT System expansion in Houston, says plan is in best interest of Texas 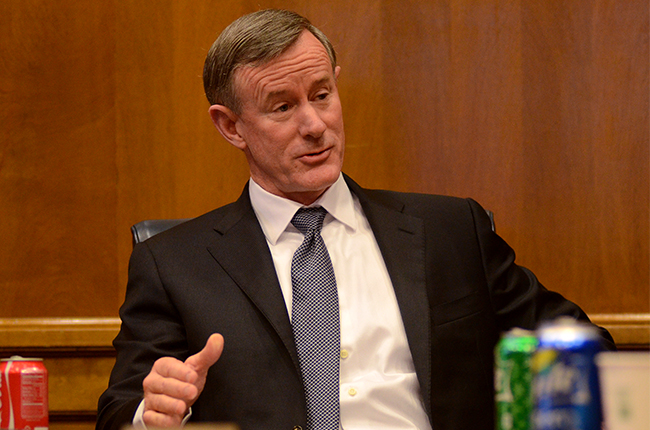 Chancellor William McRaven conceded to being “guilty as charged” of not collaborating with lawmakers on a plan to expand the UT System in Houston during a higher education board meeting Thursday.

After receiving backlash from Houston-based lawmakers and civic leaders, McRaven said in a meeting with the Texas Higher Education Coordinating Board that he should have discussed the plan with lawmakers and higher education officials, according to the Austin American-Statesman. McRaven said he did not want to disclose the price of the land being bought by the UT System to prevent the price of the land from rising.

“It probably would have been a good idea [to consult with the coordinating board],” McRaven said. “If the word gets out, the next thing you know, the price goes up.”

In his strategic plan for the future of the UT System, McRaven said he hoped to build a 300-acre campus in southwest Houston near the downtown area to increase UT System research funding and advance underdeveloped research projects. A UT System press release said the System did not intend to duplicate the efforts of existing UT home institutions and would convene a task force primarily composed of Houstonians to advise on possible uses of the land.

The land would cost a total of $450 million over 30 years, McRaven said Wednesday to the House Higher Education Committee.

Welcome Wilson Sr., chairman of the University of Houston’s political action committee, said that a new System campus in Houston would inhibit the ability of Houston-based higher education institutions to receive limited resources and would not be a good use of taxpayer money.

“Competition may be good for business, but universities are not businesses. Universities operate on taxpayers money. That money belongs to the taxpayers,” Wilson Sr. said.

In a letter to McRaven, Sen. John Whitmire (D-Houston) said the System’s expansion could adversely affect the ability of Houston-based institutions to remain competitive for faculty and research dollars.

“In my 42 years of service in the Texas legislature, I have not seen such an affront to the legislative process and conservative deliberations of the higher education community,” Whitmire wrote. “I would strongly urge the University of Texas leadership to hold off on any action … until the Legislature reconvenes.”

Even as McRaven acknowledged communication shortcomings with other higher education officials, he emphasized the plan would benefit the state as a whole.

“This is about helping the people of Texas, not just Houston,” McRaven said. “I intend to make this unique opportunity a reality.”