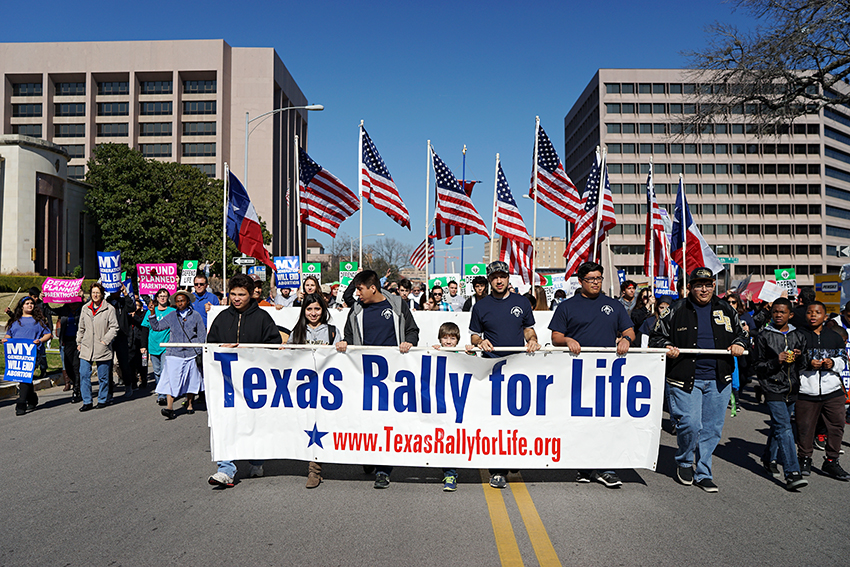 Thousands gathered on the south steps of the Texas Capitol to express support for tightened abortion restrictions one day after the 43rd anniversary of Roe v. Wade at an anti-abortion rally Saturday.

Among the speakers was Melissa Ohden, who had a saline infusion abortion, which consists of injecting a saline solution into the uterus, according to a testimony she gave before the U.S. Congress House Judiciary Committee last September. The procedure is rarely used anymore because safer abortion techniques have been developed.

“What a tragedy that we have come this far,” said Ohden, the founder of the Abortion Survivors Network. “We know that your tax dollars and mine are still going to an organization [Planned Parenthood] that has perfected that procedure that was meant to end my life.”

The rally comes at a time when the Supreme Court is slated to hear challenges to the requirement that abortion providers must qualify as “ambulatory surgical centers” and only employ doctors that perform abortions who have admitting privileges at a nearby hospital.

“We want to at least make sure the place that a woman gets an abortion and that the person doing the abortion is as safe as can be,” said Sen. Donna Campbell (R-New Braunfels), who is a doctor, before the Supreme Court, referring to the recently passed Texas abortion law, House Bill 2. “Are they wanting to really scrap the safety of a procedure for women?”

Austin gynecologist Christian Sebastian, who served on the local Planned Parenthood community board in 2013, has disputed the claim, stating that patients who develop complications from abortion do so after they are home, not in the abortion clinic.

Leah Brown, a spokesperson for Texas Alliance for Life, estimated between 3,000 to 5,000 people attended the rally, an increase from previous years.

Madison, a supporter of Planned Parenthood who only gave her first name, said her experience as a 16-year-old seeking advice on a possible pregnancy shaped her views on abortion.

“I think any woman should have the right to do whatever she wants to do with her body,” Madison, who works as a barista at Starbucks, said. “I had a pregnancy scare, and I went to a pregnancy crisis center, and I was laughed at.”

Gov. Greg Abbott said in a letter read to the crowd by Taylor that Texas is and should remain committed to ending abortion.

“Our state stands at the forefront of the campaign to preserve life,” Abbott wrote. “House Bill 2 is being challenged at the Supreme Court, but we are prayerful that the justices will agree with Texas that this law protecting women and their unborn babies is fully constitutional.”