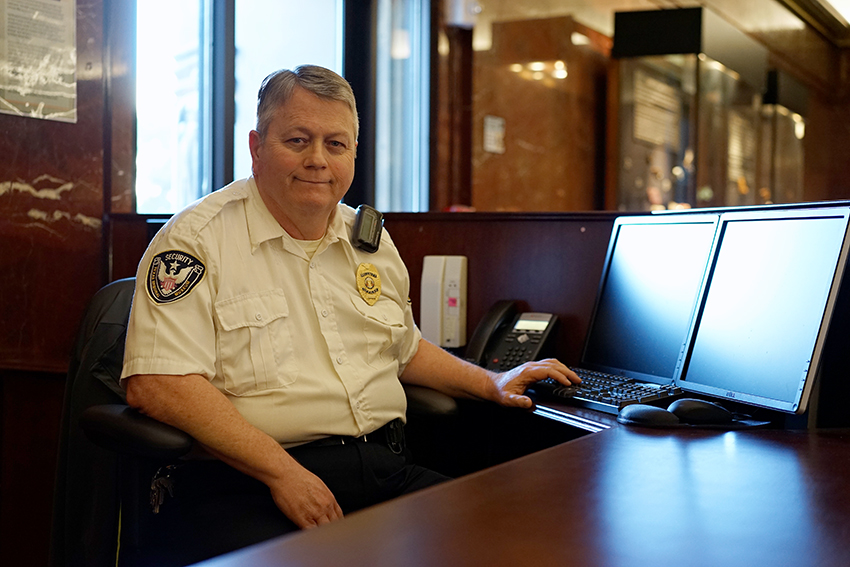 Editor's note: In 300 words or fewer, this series spotlights people in our community whose stories typically go untold.

It’s still dark outside as Michael Fallon walks up the stairs to work, passing a saber-toothed tiger on his left. He unlocks the front door and flicks on the lights, illuminating the 40-foot wingspan of a Texas Pterosaur hovering above him.

Fallon is the first one at work every day and the last one out. Until the next employee arrives around 9 a.m., the Texas Memorial Museum’s 66 million-year-old Monasaur skeleton keeps him company.

“A lot of people kid me about that movie ‘Night At The Museum,’” he said. “If the animals were to come alive, it would be spooky, but in reality, it’s just very quiet.”

Most of his workday is spent in his security nook inside the museum’s Great Hall. Two computer screens stare back at him with live surveillance footage of the museum grounds.

At all times, he is ready to respond to a crisis. After nine years in the U.S. Air Force and 23 with UTPD, he is well versed in emergency protocol, although at the museum he rarely has to use it.

“If I can keep people happy and safe, that makes me happy,” he said.

In 2010, Fallon retired from UTPD because it was time for a new chapter in his life. He said being a cop is a young man’s game, and as he moved deeper into his 50s, he wanted a change of pace.

The museum provided just that. Michael gets to see every patron who comes through the museum, from retirement home groups to pre-K classes. He watches each of them experience the same wonder and awe he feels every day from his security nook.

“I think people should appreciate natural history so they know what was here long before we were and appreciate what we have now,” he said. “It humbles you.”