SURE Walk to add technology-based features to service 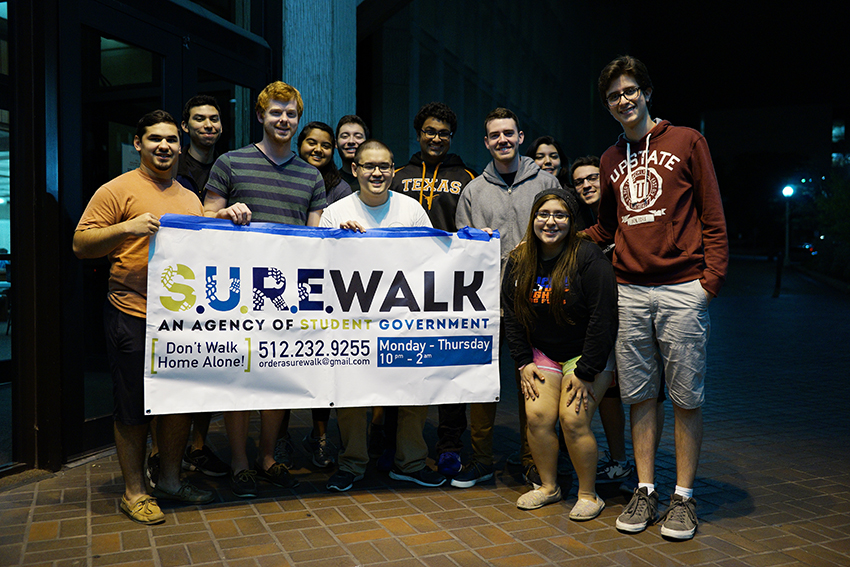 SURE Walk, a service that provides students with a companion for late-night walks home, is finalizing plans to create a more comfortable atmosphere on campus by integrating technology-based efforts into its system.

The service, which is a Student Government agency composed of student volunteers, opened for the semester Monday night. Currently, students can order a walk by calling 512-232-WALK between 10 p.m. and 2 a.m. Monday through Thursday nights.

Krishan Sachdev, health and society junior and SURE Walk director, said the service is working with UT policy directors to develop an app that could potentially enable video-chat services or GPS monitoring abilities.

“Today we’re a very digital society — everybody you see is either on their phone, on their laptop or on their tablet,” Sachdev said. “We’re very tech-savvy and comfortable using an app interface.”

By eliminating the need for a volunteer to be present during a student’s journey home from campus, Sachdev said he believes the service will become more accessible to students regardless of where they live.

He also said the app will create a more efficient method of contact for students who want to avoid any preconceptions that come with being walked home by someone in an orange vest.

Marketing junior Kara Wang said she believes the social stigma of walking home from campus with a volunteer prevents students from utilizing the service.

“Some people have an embarrassed view of it,” Wang said. “There are some people that have issues walking back alone, but I wouldn’t say most people do.”

Sachdev said the service also plans to implement more ways to request a SURE Walk instead of only through phone calls. He said students will be able to order a walk through email soon, and, while the app is still being finalized, he hopes it will provide an additional means of request.

Marketing sophomore Brianna Seidel said she would be more willing to order a SURE Walk if methods other than calling were involved, preferably text.

“If you’re studying in a library, having to go outside to make a phone call is more difficult than just texting while staying in the library,” Seidel said.

While texting will not be an option for requesting the service due to the phone number’s lack of cellular capabilities, other options will be provided in the near future, according to Sachdev.

Currently, Sachdev said he is not sure if the app will be integrated into the existing UT app or if it will be launched as its own app. Through advertising efforts during summer orientation, Sachdev said he hopes to have a grand launch of the reformed service throughout the beginning of next semester.

“As an organization, SURE Walk and Student Government, we want every student on our campus to be comfortable,” Sachdev said. “We understand that attending an institution like the University of Texas sometimes requires studying late or being on campus at odd hours, and no one should have a problem coming home from that.”