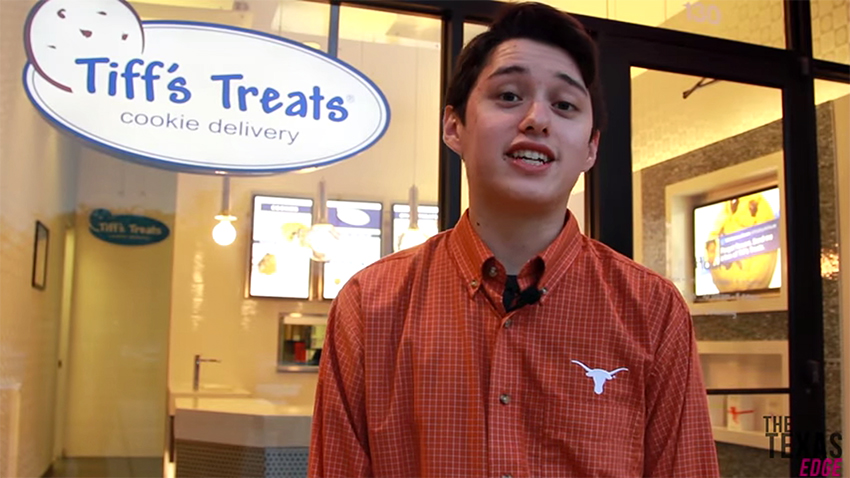 Courtesy of The Texas Edge

The twins released the first episode of the series, which tells the stories of Texas businesses, on Facebook in early January. In just over two weeks, the episode amassed 12,000 views and Twitter endorsements from the likes of Reddit co-founder Alexis Ohanian.

“We all kind of think at least one time in our life about creating our own business,” Andrew said. “Or we see someone make some really cool thing, and we’re like, ‘Man, why didn’t I think of that?’ I think the Texas Edge really shows the behind-the-scenes of what it actually takes to do it.”

The brothers drew their inspiration from a similar online show called “Small Empires,” which highlights startups in New York City and is hosted by Ohanian. They said they hoped to replicate that model in Austin.

“We knew there was an environment like that here in Austin as well,” Andrew said. “We had seen that there were some people who had already covered stories on Austin entrepreneurs through video, but not in the same way that ‘Small Empires’ did. ‘Small Empires’ showed off a really cool, savvy way to tell the stories of these people. I just kind of wanted to see if I could do this.”

The eight-minute first video tells the story of UT alumni Leon and Tiffany Chen, who founded the cookie delivery service Tiff’s Treats in their college apartment in 1999. During the interview, Leon Chen cites the company’s location in Austin and support from the UT community as being instrumental in Tiff’s Treats’ later success.

Indicated by the show’s title, Christian said they aim to depict Texas as an alternative to startup hubs such as Silicon Valley.

“It’s like this chip on our shoulder,” Christian said. “It’s kind of just a pride thing. That’s why I think that narrative is in there, because we are trying to bolster this idea that Texas is an environment that people can come to and really build great companies.”

Before beginning work on the show, Andrew approached Plan II and business honors sophomore Karen Mahendroo to help him network in Austin’s entrepreneurial scene. Mahendroo introduced the brothers to one of their first subjects and said he is excited to see the Córdovas shift their focus to encompass the rest of Texas in the future.

“I think that people are really interested in Austin, and [the Córdovas] are really taking the reins on showing people what a great city it is and what a thriving entrepreneurial spirit Austin has,” Mahendroo said.

The twins have already filmed interviews with the founders of Grandex, the company behind the fraternity-centric website Total Frat Move, and are working on editing that episode. Andrew said his busy schedule during the school year leaves him unsure of when the next episode will be released.

“When it comes to the future of [The Texas Edge], we don’t really know what to do with it,” Christian said. “We want to [release] it to where we catch the flame, but ultimately our goal is that the product is good.”