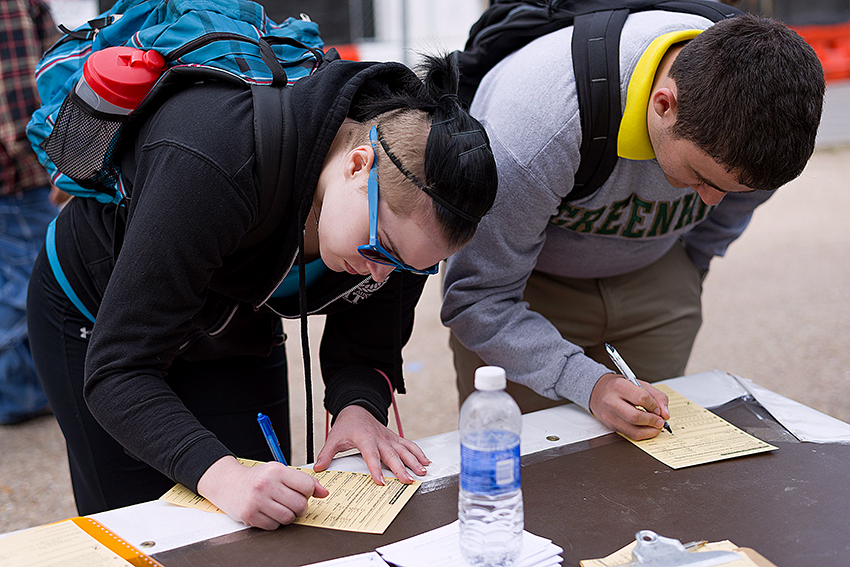 With a competitive presidential election in both primaries, and an open legislative seat serving West Campus, UT students have the opportunity to make their voices heard at the ballot in 2016.

But first, they need to register.

Organizations such as Hook the Vote, a Student Government agency, and UT Votes, a nonpartisan civic engagement group, are attempting to register as many students as possible through tabling on campus and helping students fill out voter registration forms in preparation for the Feb. 1 deadline.

According to the Travis County Tax Office, students must register with either their home address if they prefer voting in those local elections or with their Austin address in order to vote here. This means some students, who have already registered before, may need to update their information to vote for local candidates in Austin.

Ashley Alcantara, Plan II and government junior and director for Hook the Vote, said the organizations are targeting not only interested students, but also students who may be intimidated by the voting process.

“It’s about finding the people who already want to register and then also trying to open people up who maybe aren’t as interested and then explain to them how easy it is and how important voting is,” Alcantara said.

Alcantara said Hook the Vote estimates they have already registered around 300 new students in the past week and hopes that the number will near 1,000 by the registration deadline. Once a student has filled out their registration forms, Hook the VOte volunteers will then complete the process by taking their paperwork to the office.

Psychology senior Tessa Tigar-Cross, UT Votes philanthropy chair, said the organizations are anticipating an uptick in voter registration numbers and turnout at the polls in part because of the competitiveness in both parties’ primaries for president.

“The excitement on campus has definitely pushed further spikes than normal,” Tigar-Cross said. “I’m very glad to see on campus that there’s a significant amount of people who have become very
civically active recently.”

After the registration deadline has passed, Alcantara said Hook the Vote and its partners are planning to encourage voter turnout for the March 1 primary through advertising on social media, continuing to table on campus and also introducing a text messaging system for reminders.

“We’re getting people’s phone numbers, and so hopefully we can text them on election day and remind them where their polling location is if it happens to not be on campus,” Alcantara said.

Radio-television-film junior Laura Morales, who registered as early as possible, said she plans to vote in the primaries so that she can have a voice in the electoral system and on the eventual nominee for president.

“As a minority, especially in this election, it’s very important to go out and vote against racist opinions,” Morales said. “I still don’t know who I’m planning on voting for … but it’s definitely something I want to have an impact on.”

Any student still needing to register by the deadline to vote can find Hook the Vote, UT Votes and other organizations registering voters in front of Gregory Gymnasium until midnight on Feb. 1.