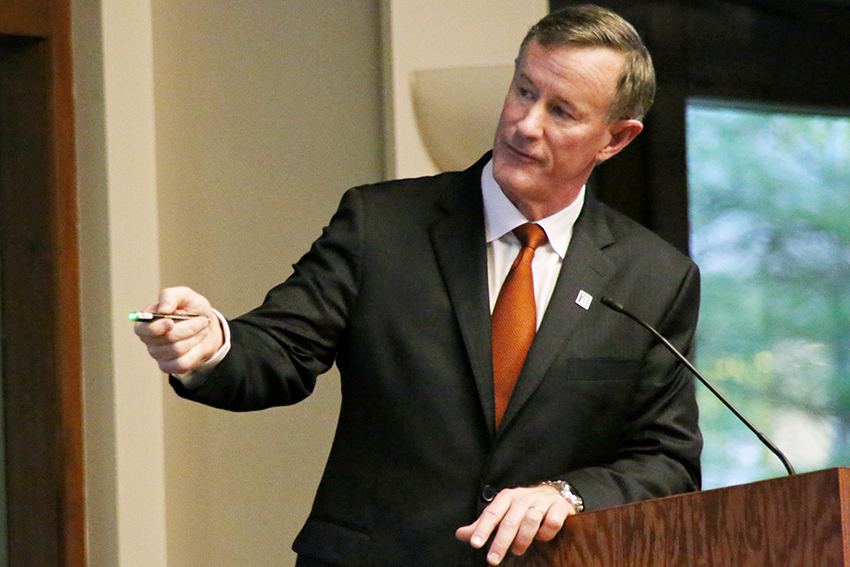 Students at every UT System institution will be required to participate in leadership education as part of the core curriculum, starting as early as next year.

Named the American Leadership Program, the program aims to implement a leadership core curriculum in UT System institutions to teach students leadership skills, according to the strategic plan developed by UT System Chancellor William McRaven that addresses the future of the UT System. Each institution will draw on military veterans, business leaders and civic leaders to help teach these courses.

Other plans for the program include the development of an executive leadership program for UT System faculty and staff.

Tony Cucolo, associate vice chancellor for leadership development and veterans affairs for the UT System, said the program for undergraduate students would be implemented at System institutions either through a one hour lower division and a one hour upper division course, or a hybrid of existing courses.

Cucolo, who is spearheading the program, said the program would teach peer leadership, communication skills and other aspects of leadership aimed at the needs of students, as well as place students in real-world leadership situations outside the classroom.

The idea for the leadership program came from McRaven’s experience of growing in-house talent within the army, Cucolo said. Similarly, Cucolo said, McRaven wants to invest directly in the students, faculty and staff of the UT System.

“An army can’t get a general officer,” Cucolo said. “They can’t hire an executive from Dell. They have to grow their own. He [McRaven] said ‘I want every product of the UT System to have been exposed to or equipped with some level of leadership ability.’”

While the exact timing for the implementation of the program hasn’t been determined yet, Cucolo said he hopes to implement a pilot program by the 2017-18 academic year, noting the chancellor wants to implement this program as soon as possible.

“He has the ways and the means to achieve an end — and the end is to contribute positive leaders to society,” Cucolo said.

Rachel Osterloh, president of Senate of College Councils, said she thinks a student leadership program like this will help students learn more about themselves and how to serve the community.

“It makes logical sense to begin this process for self-discovery on a university-wide level,” Osterloh, a government senior, said via email. “I think this leadership program will foster the self-discovery process.”

“I think it would be more beneficial if it taught skills like professional development,” said Paredes, who is a peer leader educator in the Leadership and Ethics Institute. “Leadership cannot be taught; it has to be gained from a hands-on experience.”

Cucolo said UT-Austin’s signature UGS courses already form the “nucleus” of the chancellor’s vision for the implementation of the core curriculum and may be a good candidate for a hybrid curriculum. He said the program would aim for a high level of rigor and promised it would not delay graduation.

“I’ve done a cursory review of what other institutions are calling ‘leadership education’ — and frankly, some of it is quite lacking,” Cucolo said. “We’re talking about something disciplined, relevant, meaningful and something we hope will stick with the individual.”