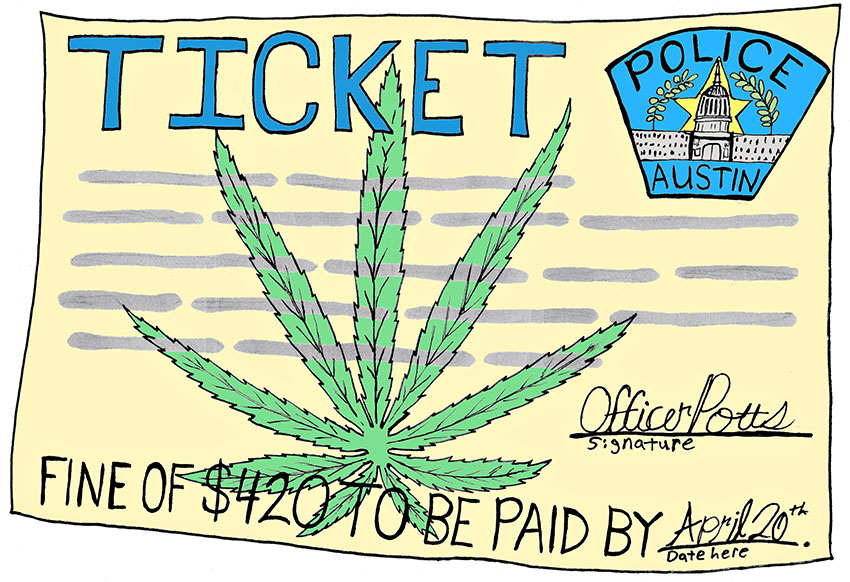 Some Texas counties are exploring the option of issuing tickets and scheduling court appearances instead of arresting for marijuana possession.

The Texas legislature passed a “cite and release” policy in 2007 for certain misdemeanor crimes, including marijuana possession. The policy enables officers to issue citations for specific offenses and is currently used in Hays County, Travis County and Williamson County, according to Lee Knouse, senior police officer with the Austin Police Department.

“To my understanding, the intent of the law is to free up officers for more egregious offenses and to enable them to assist the public in that way,” Knouse said.

The policy can be used when a person is caught with four ounces or less of marijuana. While offenders are still referred to the court system through this policy, the process differs from the previous method of booking offenders into jail and having a judge assign a bond amount before release.

Lieutenant Charles Bonnet with the University of Texas Police Department said the state law allows the policy, However, each jurisdiction operates differently and has its own procedures regarding this law.

According to Bonnet, UTPD issues citations for up to two ounces of marijuana possession if the individual can be identified and lives in UTPD’s jurisdiction.

“If somebody is in Austin visiting for a conference or a concert, but they live in Seattle, then we can’t give them a ticket and expect them to fly all the way back from Seattle to go to court,” Bonnet said.

However, Bonnet said UT students are also eligible for citations regardless of their permanent address, as approved by Judge Herb Evans.

“As long as they’re a student and we know that they are going to be here for the foreseeable future, then [Evans] is fine with us writing a citation and not making the custodial arrest in those circumstances,” Bonnet said.

Few counties currently abide by this policy in Texas, but the number could be on the rise. According to the Dallas Morning News, there have been recent reports of the Dallas City Council considering the policy.

UT sociology professor William R. Kelly said in a Dallas Morning News column he believes the policy would be beneficial for other Texas cities and counties.

“This is a good idea because it avoids the stigma of individuals being formally arrested and booked into jail,” Kelly said in the column. “It also saves significant amounts of police time as well as expensive jail resources.”

Knouse said the policy saves time by eliminating the booking process, especially on nights or weekends when jails tend to be busier.

A person must also meet multiple conditions for the “cite and release” policy to apply to him or her, Knouse said, including the requirement of being a resident in the county in which the offense occurred.

In addition to marijuana possession, cite and release in the Austin area can apply to theft, criminal mischief, graffiti and driving with an invalid license, according to the law.