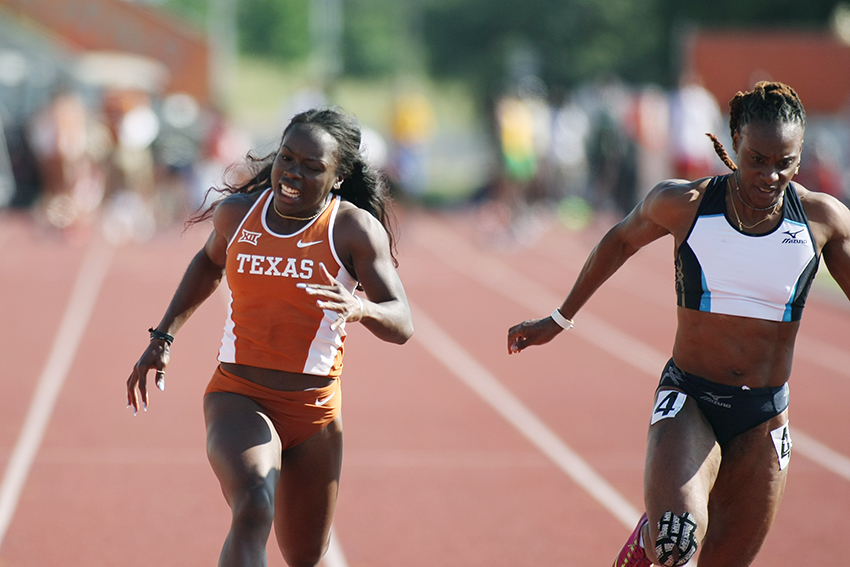 Morolake Akinosun starts her warm-up routine 80 minutes before her race. She doesn’t believe in superstitions, as long as her white spikes are laced up.

In the lane next to her is freshman Teahna Daniels, who breathes slowly to calm her nerves. The gun sounds; the two are off.

Despite opening the season being edged out by Daniels, Akinosun ran her fastest season-opener at 7.26 seconds at the Texas A&M Team Invitational on Jan 16.

“It was a personal record for Teahna and a really exciting moment for both of us,” Akinosun said.

“This season will be a lot of learning experiences for me.” Daniels said. “I need to take every meet as it is.”

Akinosun said she looks forward to lending her experience to Daniels while competing with her at the same time.

“Even during Teahna’s recruitment, before she came to Texas, I decided I was going to take her under my wing,” Akinosun said. “She’s such a talented young person, and I want to get this time to actually be on the team with her, so when I am no longer on the team, she can take that spot and be leader on the sprints side.”

“She’s running fast and will make an impact on the conference and national level,” Bailey said. “But she’s still a freshman, so it’s good she has a role model like Morolake to guide her.”

“We’re hoping to add Ariel Jones to the list for the 400 hurdles, and I know Teahna is looking to get on that list,” Bailey said.

Okolo and Gordon are expected to debut in their specialty race, the 400-meter, in two weeks at the Husker Invitational. After weeks of training at the short sprint level, the pair is now working their way back into the season.

Despite having an inexperienced roster, Akinosun expects big things from the Longhorns in 2016.

“We have a lot of depth in this team compared to previous years,” Akinosun said. “You’re going to see some great things from our relays and sprints but also from our freshman girls, who are here for years to come.”