Rising above a culture of silence 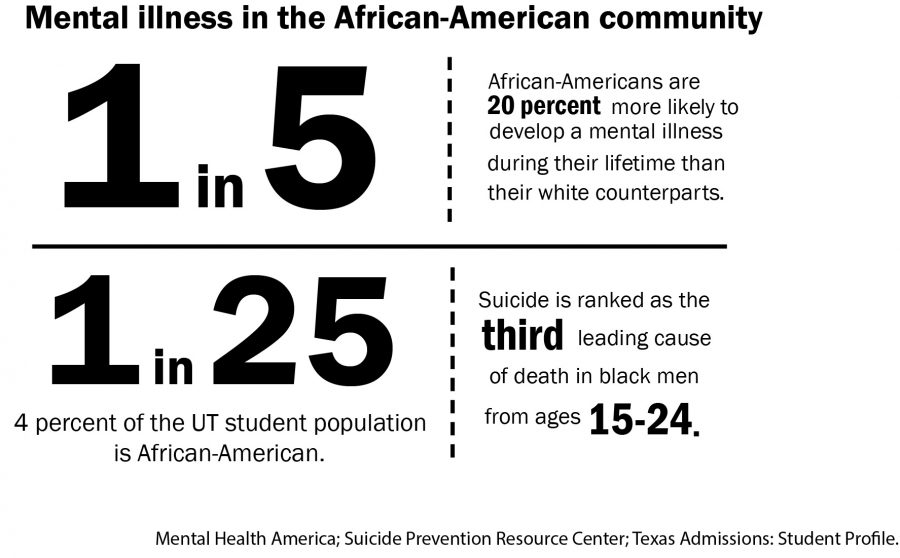 College is a stressful time for any student. For ethnic minorities, however, navigating through a predominantly white college campus can be particularly demanding.

It is common for the alienation felt by minorities to produce so much anxiety that it becomes unbearable. Often they will put unnecessary amounts of stress on themselves to succeed to disprove stereotypes. Current studies are finding that this stress is leading to a mental health crisis in minority communities that is often ignored. However, we cannot afford to ignore it any longer.

Mental health issues are especially pertinent to black people on primarily white college campuses, like the University of Texas at Austin, that are characterized by white culture. Being isolated as a token minority on this campus puts black students at an even higher risk of developing mental health disorders such as anxiety and depression. This is troubling considering African-Americans are already 20 percent more likely to develop a mental illness during their lifetime than their white counterparts. Typical college student stress, in addition to daily encounters with racism, prejudice and stereotypes, make blacks particularly vulnerable to mental distress. The challenges faced within our community differ slightly across genders, but wounds suffered are just as great.

For black women, the stereotype of being strong and independent has become too much to live up to. The emotional burden of always having to put on a brave face only intensifies the turmoil caused by personal trauma, stressful school weeks or just a plain bad day. Youth and communities studies junior Brianna Powell added that there’s a “suck it up and push forward” approach to mental illness in minority cultures.

“You just don’t talk about your problems,” she said.

Playing Superwoman even at times when these women want to break down can be exhausting and damaging to their personal stability.

Black women’s plights are detrimental to their mental health, yet black men are suffering just as much if not more. Suicide is ranked as the third leading cause of death in black men from ages 15-24. In her book “Black Pain,” mental health expert Terrie M. Williams wrote that our society’s confusing ideas surrounding manhood fall most heavily on black men.

This becomes particularly painful during college as young men are beginning to discover who they are and what they want both personally and professionally.

Black women and men battle against different societal pressures as they navigate through young adulthood, but both are battling in silence. Despite the many resources on and around campus, it’s rare for black students to seek out treatment when they’re dealing with serious distress. Economics junior Lauren Matthews reasons that blacks just don’t feel comfortable discussing the topic.

“For so long, black people have had to do more just to be seen as equals,” Matthews said. “So addressing mental illness is hard because you first have to admit that you do have a problem.”

Yet we must. Denial and shame can no longer be our first line of defense when discussing mental illness. We are human, we are breakable and we cannot afford to be silent any longer. Our time to speak up is now.