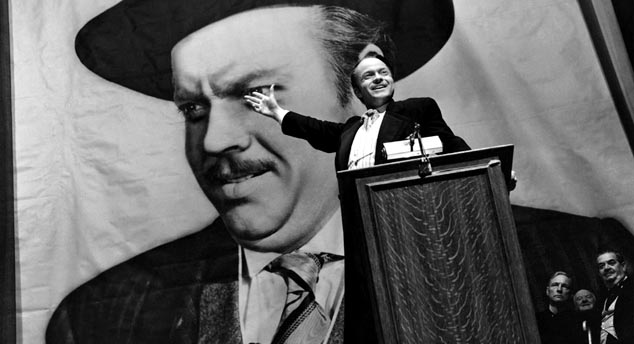 Through flashbacks, the audience witnesses Kane evolve from impoverished child to a greedy and corrupted megalomaniac. Kane attempts to find happiness by controlling the people around him and amassing his wealth but ultimately ends up defeated and alone with meaningless material belongings.

Widely regarded as one of the greatest films of all time, “Citizen Kane” was a pioneer in the fields of cinematography and narrative. Its story is superbly written and acted, and it grapples with the American dream, asking, “Is the pursuit of success absolutely worth it?”

The captured British Lieutenant Colonel Nicholson (Alec Guinness) engages in a power struggle with Saito and takes the lead on the bridge’s construction. Eventually, he is consumed by his pride and desire to display his superiority to Saito.

Meanwhile, an American soldier who escaped the camp, Shears (William Holden), and a squad of British soldiers are on their way back to the River Kwai, intending to destroy it once it’s been completed. Shears himself is actually impersonating an officer and has been blackmailed into joining the group.

Both plot lines converge in a tense standoff at the bridge, where Nicholson finds himself torn between the bridge and his allies, while Shears must overcome his cowardice and learn to give himself to a greater cause. “The Bridge on the River Kwai” is a superb entry into director David Lean’s filmography thanks to its strong characters and gripping story about soldiers struggling to protect themselves and their own sense of worth.

“The Graduate” (1967)
Prepare to be seduced by this witty comedy about aimless college graduate Benjamin Braddock (Dustin Hoffman), who has an affair with an older woman, Mrs. Robinson (Anne Bancroft), then falls in love with her daughter, Elaine (Katharine Ross). When Benjamin breaks off his relationship with Mrs. Robinson for Elaine, causing Mrs. Robinson to reveal the truth to Elaine and ruin Benjamin’s chances with her.

Directed by Mike Nichols, “The Graduate” is a clever mix of the awkward and the absurd. Bancroft’s Robinson might be cruel, but she’s no villain — she’s married to a man she never truly loved and depressed that she married only for wealth.

Though it’s a funny picture, “The Graduate” is a serious movie about lost people who make mistakes. It avoids the clichés of the romantic genre and ends on a dark but real note. There’s no happily-ever-after in “The Graduate” — there is only what lies ahead.