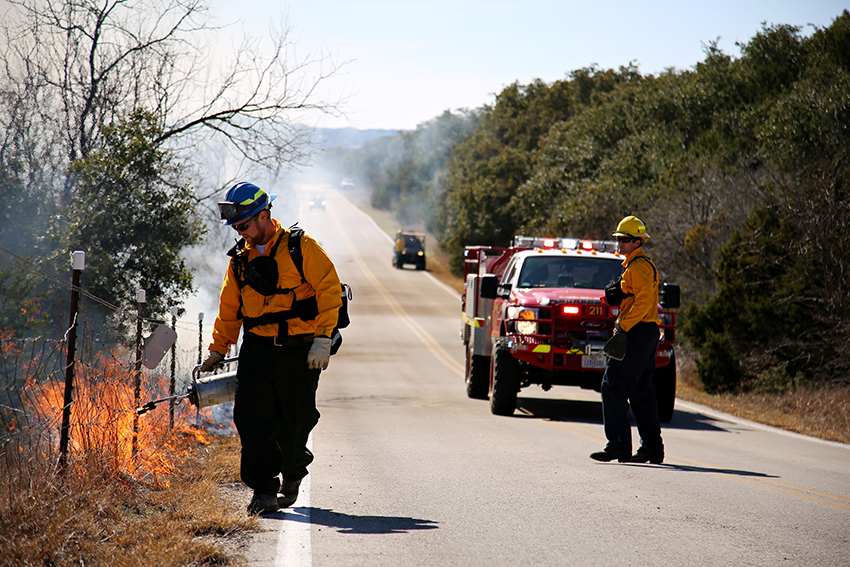 Park officials conducted the prescribed burn on 113 acres of grasslands and woodlands along the eastern side of the park Wednesday. This area is marked as Block D on the park’s map. Prescribed burning is practiced to maintain the plant community, control the number of exotic species and prevent wildfires by reducing excessive shrubs that could cause them.

Dan Pacatte, park forester of Travis County Parks, said some people are confused about the practice.

“A lot of people call it controlled burning, but the correct terminology is prescribed burning,” Pacatte said. “It is an intended fire to prevent wildfires and promote new and healthy vegetation. Our goal is to try to reduce the debris, shrubs, trees, bushes and anything that may cause a wildfire to occur.”

Charles Bergh, director at Travis County Parks, said the burned area will be closed until next week or until further notice. However, the rest of the park will remain open to the public. Park officials will be checking to ensure the fire is extinguished properly and the smoldering is contained, according to Bergh. Lake Travis Fire Rescue, Pedernales Fire Department, Plugerville Fire Department, LBJ Wildflower Center and the

Texas Parks and Wildlife Department are cooperating with Travis County Parks in the burning.
“It will be smoldering until Friday, so we will be monitoring the area until then,” Bergh said.

The smoke will remain and emit a strong odor for a couple of days, but is not threatening, according to Pacatte. A press release stated the northerly winds might carry the smoke across to the southern portions of the park and nearby communities. Pacatte said drivers and motorists should drive slowly with lights on near the smoke.

“An area should be prescribed burned about every 7 years because the shrubs and debris build up by then,” Gillman said.

Park officials said they are planning more prescribed burns in other parts of the park, but it is not confirmed when that would take place.